As you may remember, Microsoft recently open-sourced the modern Windows Calculator app. Since then, Windows Calculator source code is on GitHub under the MIT license. A few days ago, it was ported to C# and now can be launched on iOS and Android, and also on the Web with the help of WebAssembly.

The app was ported by developers of the cross platform GUI called the Uno Platform. They have written a blog post with details.

We decided to port it to C# and the Uno Platform, so that iOS and Android users could use it, but also use it from the Web using WebAssembly. Why – well that’s what we at Uno Platform do 😊 – enable the same C# and XAML code to run on the Web, Mobile and Desktop.

Check out these links: 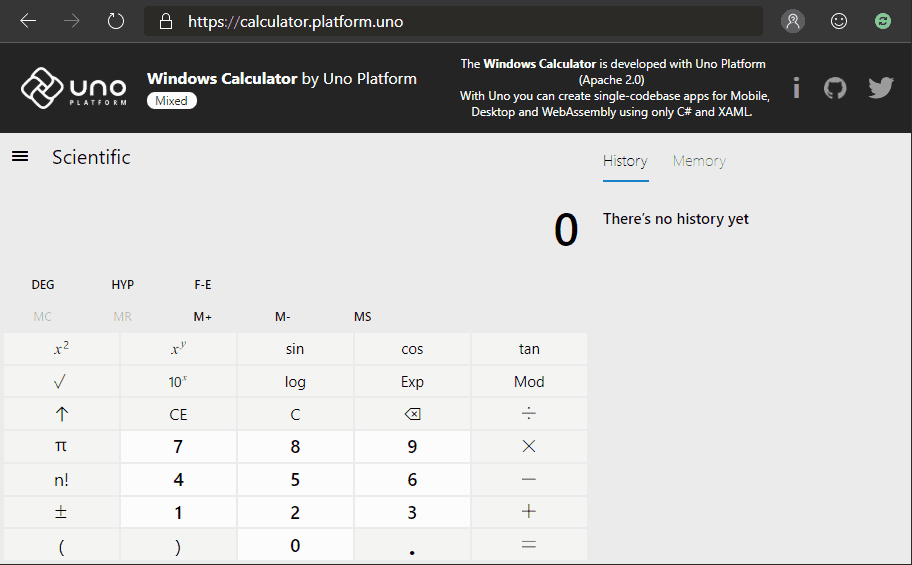 The app looks familiar on every platform. Its user interface looks similarly to the GUI of the Windows 10 app. It includes the menu on the left so switch between calculator modes (Standard, Scientific, and Programming). Converters like Currency, Volume, Temperature, are also available.

The Uno Platform being developed in C#, is able to support the Calculator on iOS, Android and WebAssembly, while some parts of the code needed to be translated to C#. Others needed to be adjusted to be compliant with clang’s C++ 11 support.

Microsoft replaced the good old calculator with a new Modern app in Windows 10. Its user interface comes with the Fluent Design bits applied. This is the only feature that is missing in the ported app, because Fluent Design remains exclusive to Windows 10.

Tip: Here is the direct link to the official Calculator app.

5 thoughts on “Windows Calculator has been ported to Android, iOS and the Web”