A few days ago Microsoft unveiled a new app store for Windows 11, for which the company significantly changed its policy regarding which apps can be published in the Microsoft Store. In particular, developers will be allowed to use third-party payment services without a commission from Microsoft. Also, there is integration with the Amazon App Store that allows installing Android apps on Windows 11. 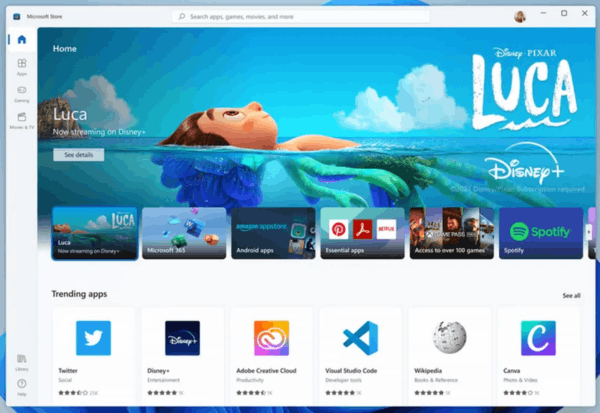 Note that the new Microsoft Store will simply show a list of apps from the Amazon App Store, and will also allow them to be quickly installed on Windows 11. Thus, developers do not need to submit their Android application to the Microsoft Store for review.

Moreover, Panos Panay said in an interview with The Verge that the company would like to see other app stores in the Microsoft Store, including Steam and the Epic Game Store.

“Windows already in many ways hosts those stores, and if we can host it through the Microsoft Store then of course. ... For sure, it means as others want to come to the Store, they’re very welcome. As a matter of fact, encouraged, and that’s kind of why we’re building out some of these policies.”

Similar to the Amazon Store integration, other app stores will have a chance to showcase their content in Windows 11, including Steam and the Epic Games Store. That is, games will continue to be hosted on Steam, but you can find them by searching the Microsoft Store. This would be really cool. However, there is no information as of now on whether Steam and Epic Games Store are interested in such an integration.

2 thoughts on “Windows 11: Microsoft is about to integrate Steam with Microsoft Store”