Microsoft at the "Windows Powers the Future of Hybrid Work" event announced several new features coming to File Explorer, security, audio and video calles, and Windows 365 integration in the coming months. Here are the announcements the company made.

Of course, many of Insiders have already tried this feature Dev and Beta preview builds. It exists as a hidden feature for several weeks. 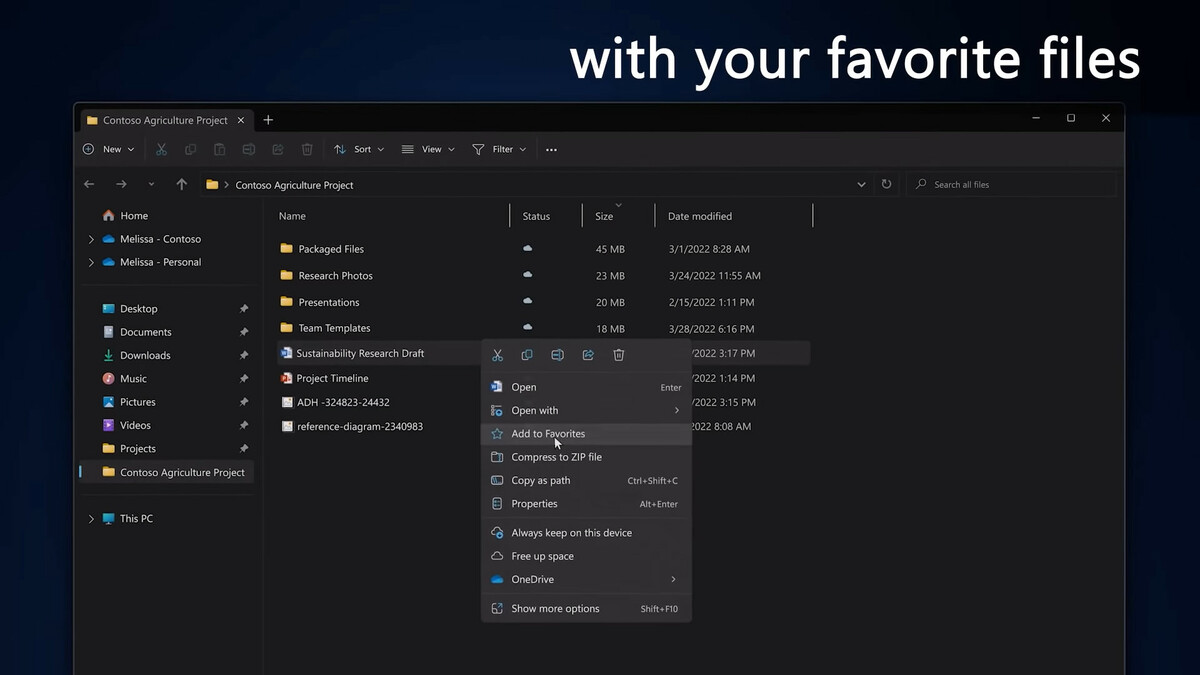 Now, Microsoft officially confirmed that File Explorer in Windows 11 will get the long-awaited tabbed interface. However, this feature is not yet officially available to anyone. 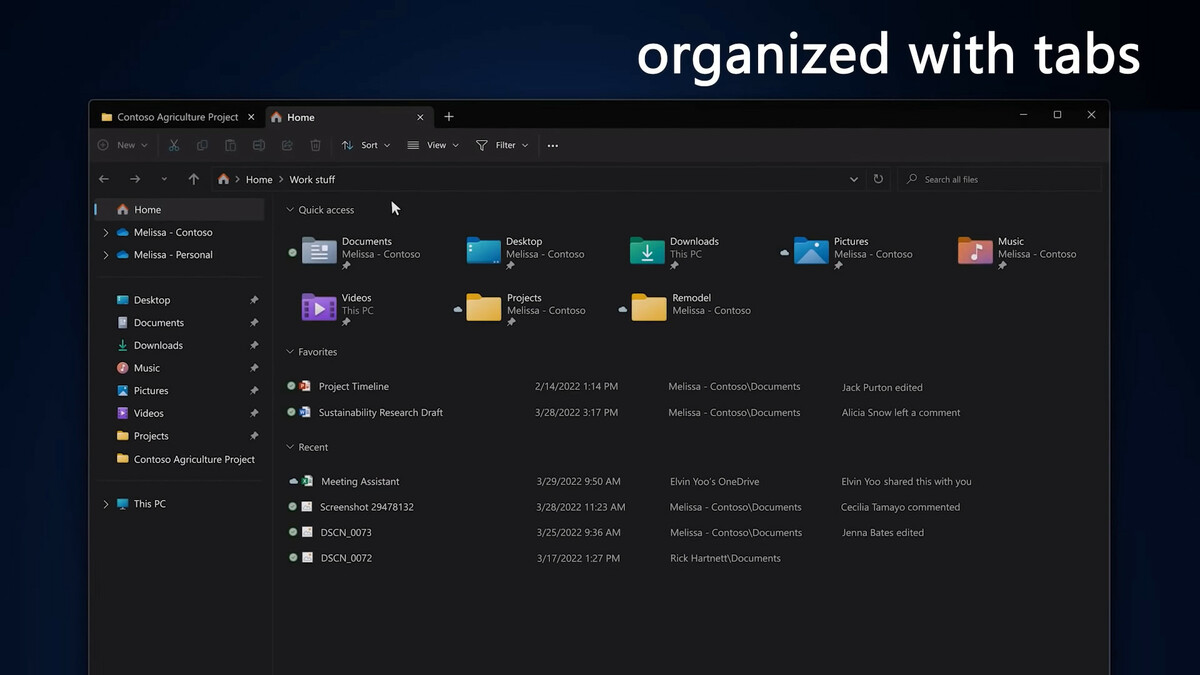 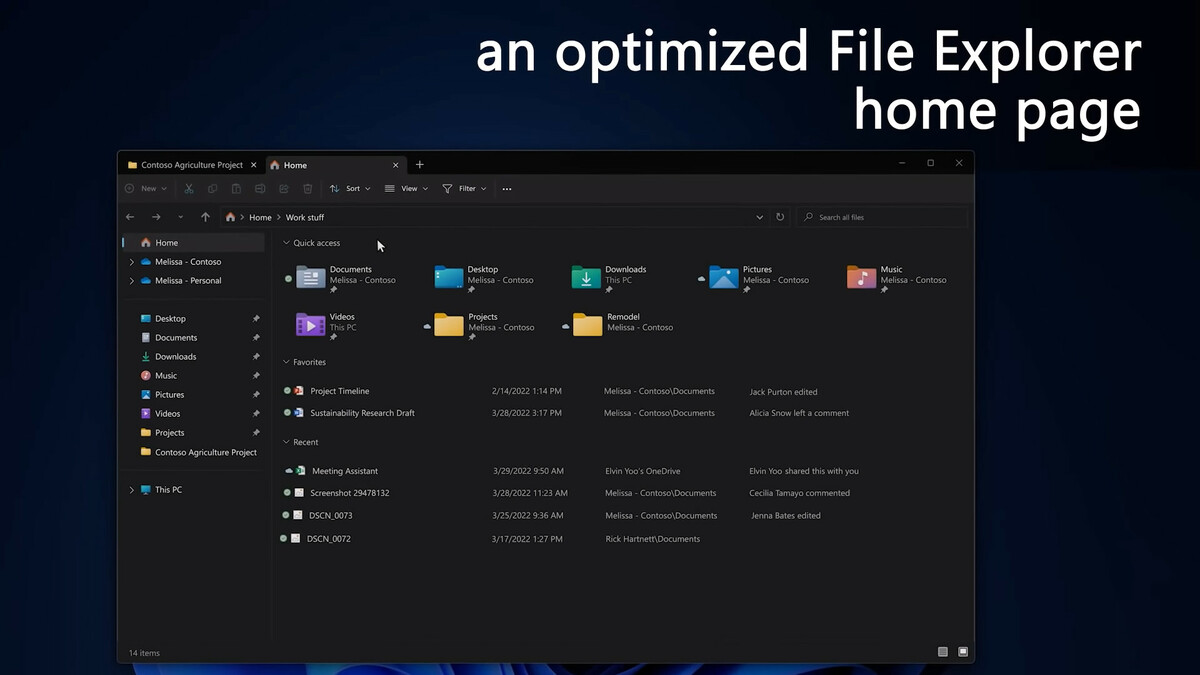 Besides, the announcement mentions features that Insiders can already try. Those includes the updated home page in File Explorer with pinned files and recent activities, the redesigned Share dialog, and the integration of File Explorer with OneDrive.

Microsoft has paid special attention to the contextual capabilities of Windows 11. For example, the Share dialog box will now automatically suggest contacts with whom you may want to share the selected data. This significantly reduces the number of clicks and speeds up the process of sending files to colleagues.

The company says that they will implement similar contextual options for all system components, including the Start menu, Microsoft 365 apps, and so on.

And finally, when you move windows to the top of the screen, a new bar will appear, which will make it easier to place windows on the screen following the user chosen layout. 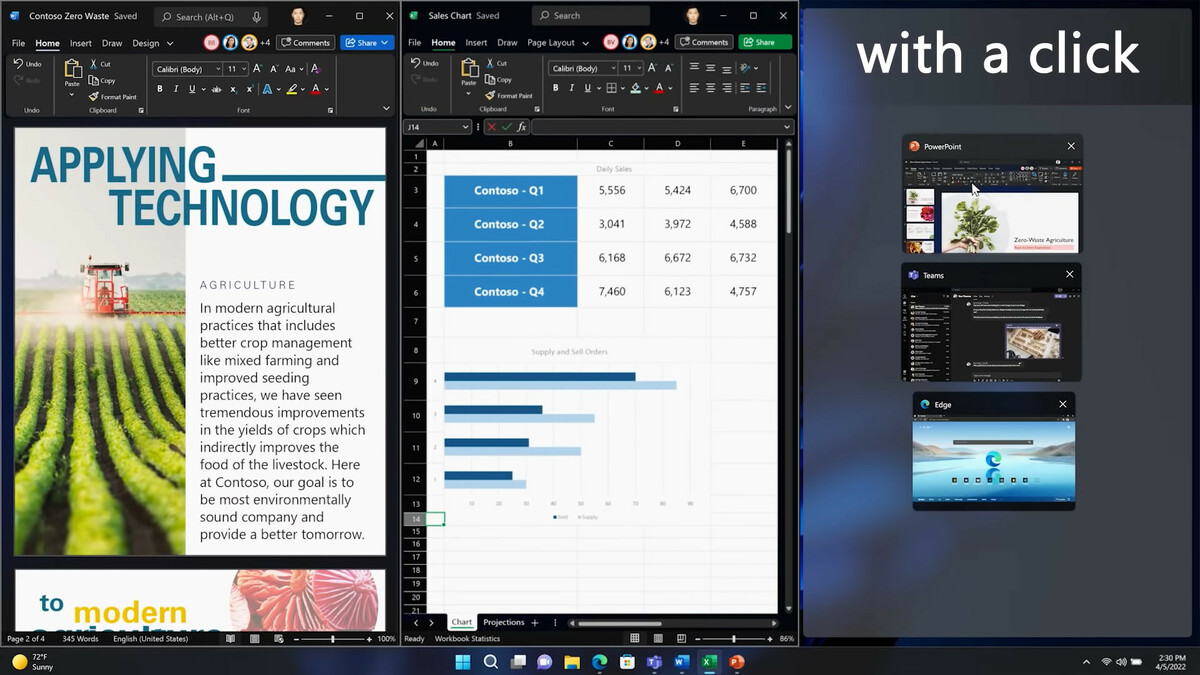 It is worth noting that Microsoft didn't name release dates for the announced features. They may be part of the Windows 11 version 22H2 coming this Fall. But the company could also be planning them for the stable version of Windows 11. Microsoft may release them via one of the cumulative updates. There is no information on this yet.

Windows 11 will soon support eye correction, background blur, automatic framing, and noise reduction. Such improvements will be useful during hybrid video conferencing. All these features will only be available on supported devices with a dedicated Neural Processing Unit (NPU), like the Surface Pro X. 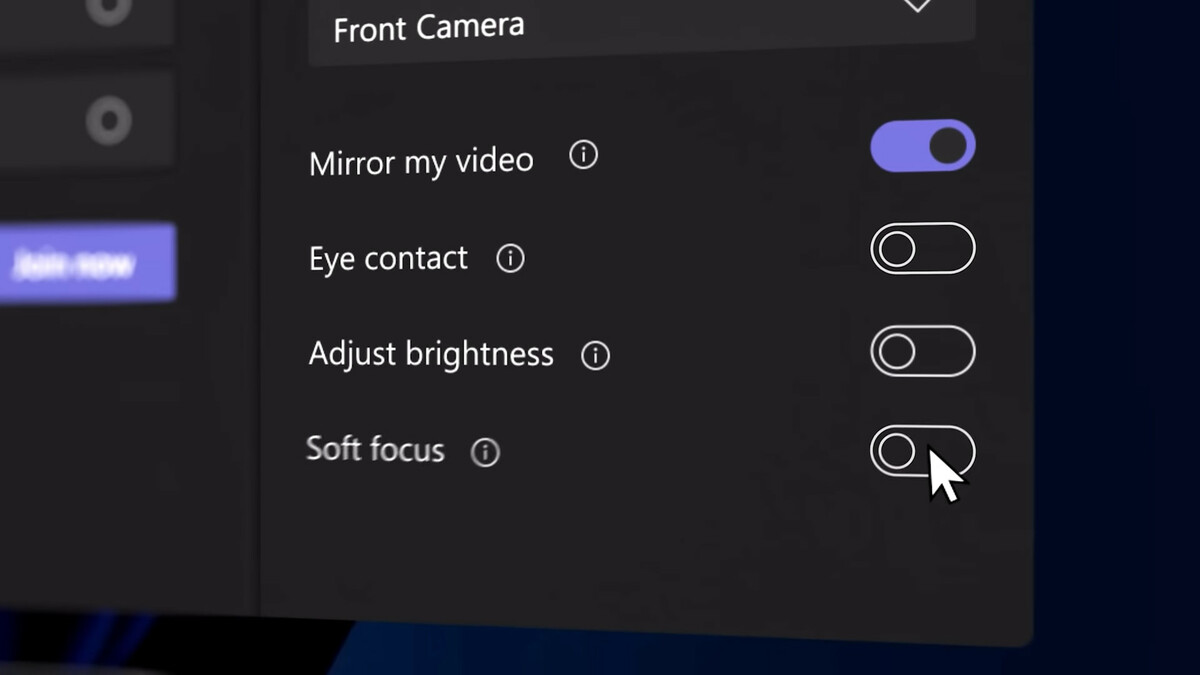 Because these technologies are part of Windows 11, they will work on any video calling app. Thanks to this, you can take advantage of these improvements in Slack or a OEM webcam app. They won't be an exclusive addition to Microsoft Teams. 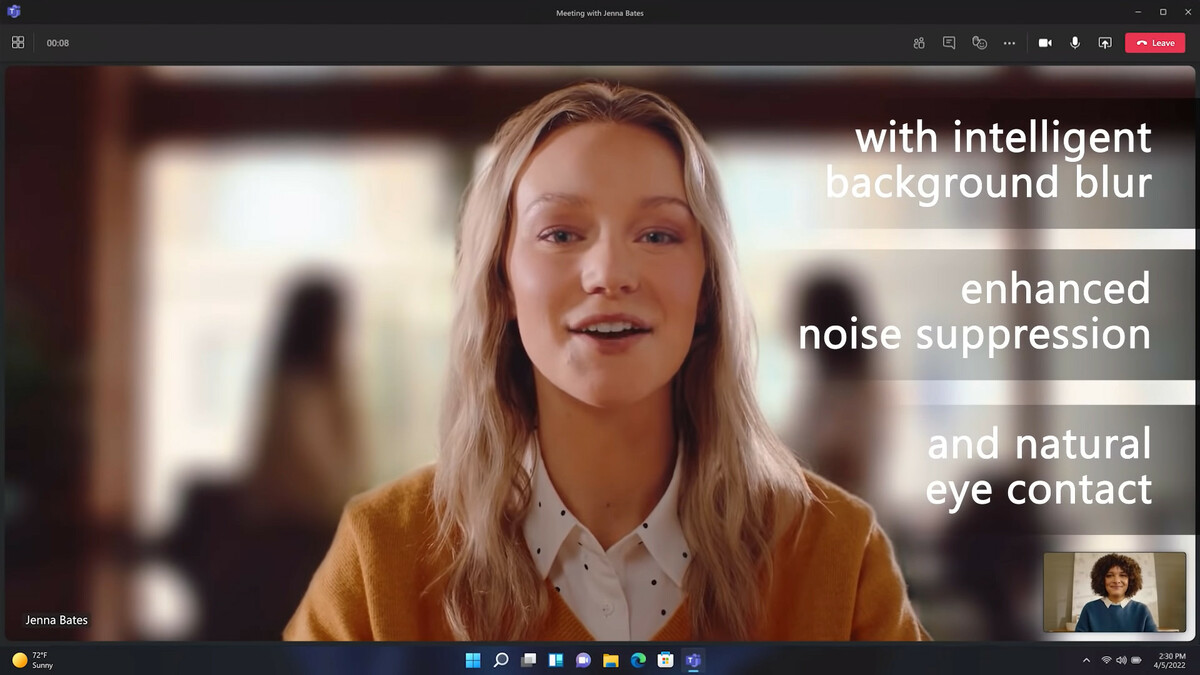 One of the first NPU devices to support these features is the Lenovo ThinkPad X13s with the Qualcomm Snapdragon 8cx Gen3 processor. It is currently unknown whether the Neural Processing Unit (NPU) will appear on devices with Intel and AMD processors.

It is worth noting that most video calling services already have the ability to blur the background and automatically crop the image. But having such a feature as a built-in option is also nice.

But most services lack the noise reduction feature. Users who have to participate in video conferences in a noisy environment will definitely find it useful.

Windows 11 will be safer thanks to AI, clouds and new hardware

The Redmond giant also shared their plans about increasing the security of devices through hardware improvements, cloud technologies and artificial intelligence.

Microsoft Pluton is a security technology that was first used on the Xbox One. It takes a Zero Trust approach and relies on several security features in Windows 11. These include TPM 2.0, Firmware and Identity Protection, Direct Memory Access, and Memory Integrity Protection.

The advantage of Pluton is that it integrates with both the operating system and the CPU. In addition, it supports periodical updates to provide the best protection for devices against threats.

At the same time, some manufacturers, such as DELL and Lenovo, have decided to drop this technology in favor of Intel vPro. The latter is not compatible with Microsoft Pluton.

The next version of Windows 11 will have the Hypervisor-Protected Code Integrity (HVCI) feature will be enabled by default. It will prevent attackers from injecting malware similar to WannaCry and similar software. In turn, the Microsoft Vulnerable and Malicious Driver Reporting Center will allow Windows to automatically block drivers whose vulnerabilities are actively exploited by hackers.

A new feature called Smart App Control ensures that only safe applications run on the PC. To do this, it will use artificial intelligence to check the processes the app runs and determine their safety.

Windows 11 will have Smart App Control enabled by default on new devices. It will also be available on devices already running Windows 11, but will require a clean install of Windows 11 to activate it.

Windows 11 will soon get support for encryption of personal data, which will protect files and information when the user is not authorized on the device. To access data, you will need to log in using Windows Hello for Business, an encryption key, or passwordless account login. This way, user data will remain safe even if the device is stolen.

Also at the event, Microsoft talked about some other security features. For example, Config Lock (already available in Windows 11) monitors registry keys to ensure that the system is not changed without permission.

Windows 11 will get built-in phishing protection for the first time in history. 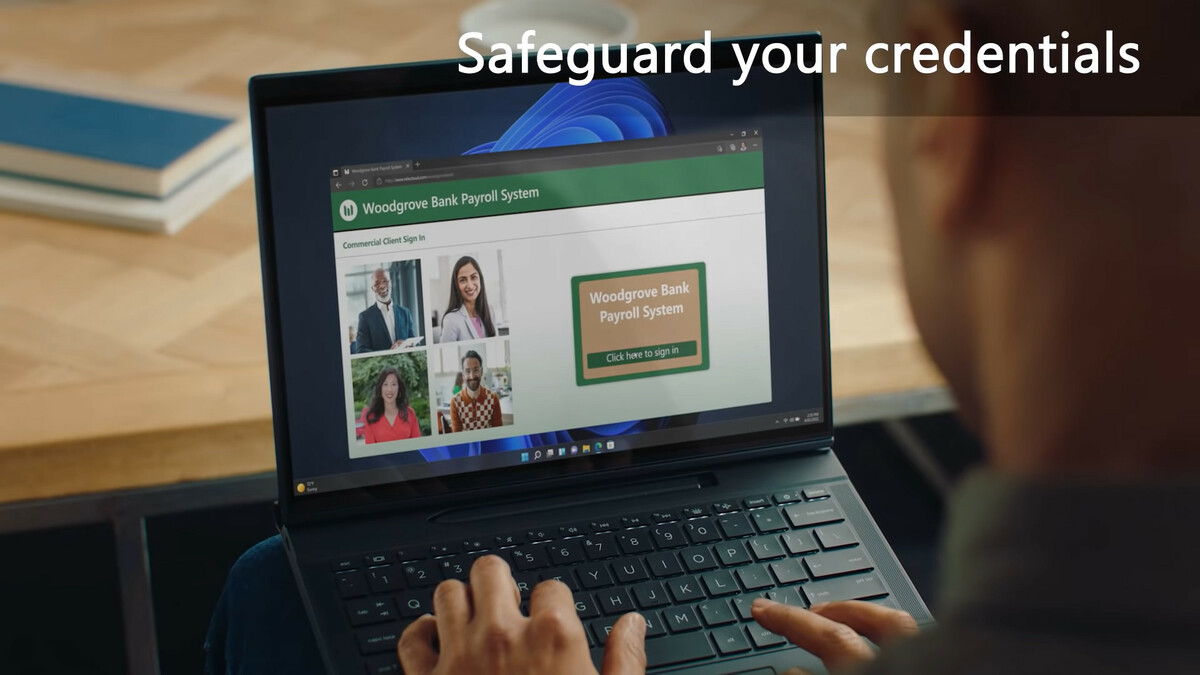 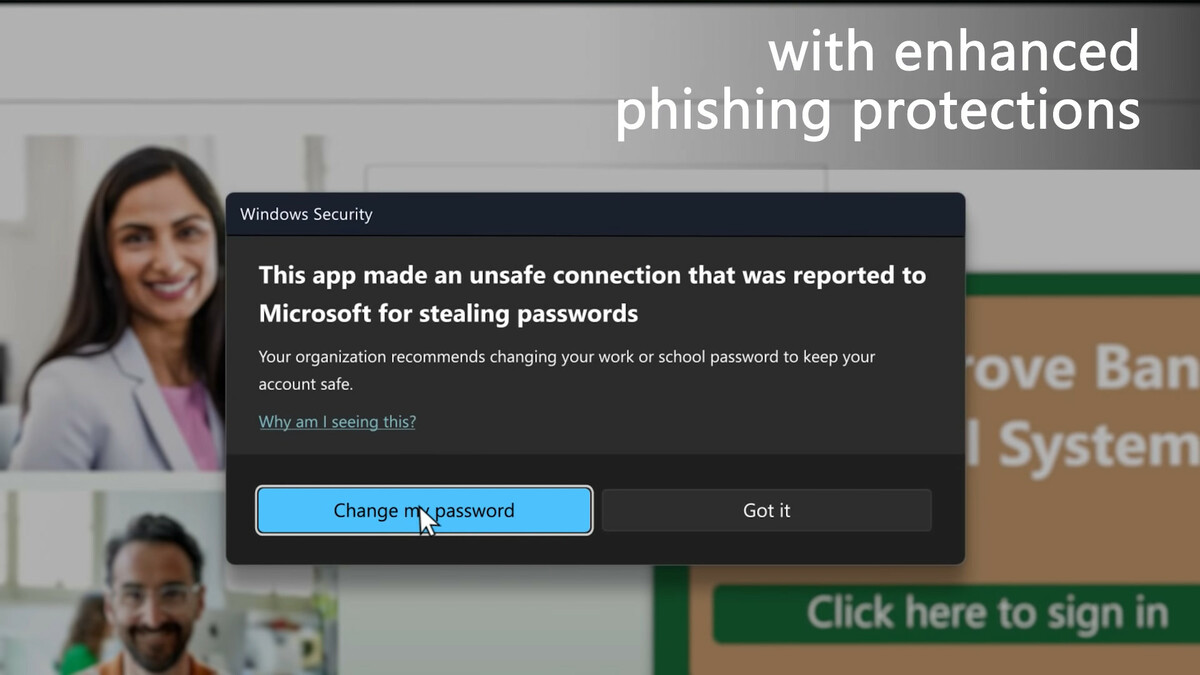 Credential Guard will appear in the corporate version of Windows 11, which protects the PC from malware, even if the process is running with administrator rights.

The company wants to implement deep integration of Windows 11 and the Windows 365 cloud service. This will allow to improve workflows and scenarios and processes in a hybrid environment.

In the future, users with access to a Windows 365 cloud PC will be able to access the system directly from the Windows 11 user interface. The taskbar and Task View will be shared between local and cloud systems.

In addition, Microsoft is working on a feature that will allow devices to boot directly into Windows 365 without having to wait for the Windows 11 local desktop to load. And if at some point the user loses connection to the cloud computer, Windows 365 will continue to work as a regular local desktop OS. All changes made will be automatically synchronized with the cloud service after the Internet connection is restored.