Windows 10 ships with a Photos app which replaced the Windows Photo Viewer and Photo Gallery. Its tile is pinned to the Start menu. It comes with tight integration with Microsoft's very own cloud solution, OneDrive.  A new announcements reveals that the feature that syncs in-progress video projects to OneDrive is being removed from the Video Editor in the Windows 10 Photos app.

The built-in Photos app allows viewing images and performing basic editing. Its tile is pinned to the Start menu. Also, the app is associated with most image file formats out of the box. Photos offers very basic functionality to view images from the user's local drive or from the OneDrive cloud storage.

The Photos app is included with Windows 10 by default. It receives updates automatically. If you have removed it or would like to upgrade it manually, navigate to this page on the Microsoft Store. 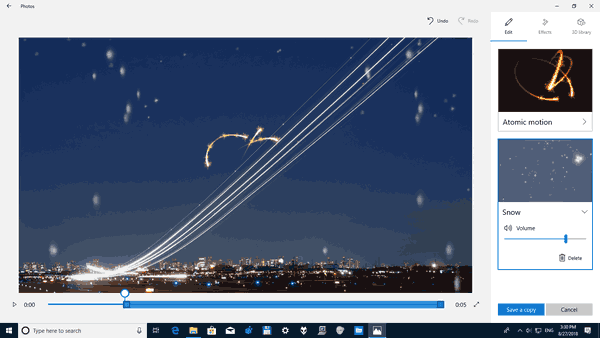 The Photos app comes with a set of 3D effects. The feature is supposed to allow users to add 3D objects and use advanced effects on them. See

Add 3D Effects to Images with Photos in Windows 10

When you save an image with 3D effects, the Photos app writes your work to a video file. It is using your video card (GPU) for hardware accelerated video encoding.

Removal of the ability to sync in-progress videos to OneDrive is due on January 10, 2020.

The metadata for any video projects that are being synced to OneDrive will be deleted. The metadata includes things like the photo and video clip order, music timing, and text for the title cards for a given video project. None of your actual photos, video clips, or anything else you’ve saved to your personal OneDrive will be affected by this change. If you’re syncing to OneDrive but only working on your video project(s) from a single device, there’s nothing for you to do. All your video metadata is automatically saved locally to your device through the Photos app.

Microsoft recommends to save all your files locally. The easiest way to save all of the latest versions of all of your video projects you’ve synced to OneDrive is to select the Turn off sync for all projects link in the app message that you’ll see on the main Video Editor page. You’ll only see this message if you’re actually syncing projects:

Syncing video projects to OneDrive is going away as of January 10th, 2020. We recommend turning off sync now to make sure you have the latest version on this PC.