Last week we mentioned we were planning on bringing more Control Panel capabilities forward into Settings, and here’s another one – we’re updating Settings > System > Sound > Manage sound devices to now let you know which device is default, and if not, enable you to set it as your default device or default communication device.

We’ve also updated the volume mixer to include a link to the per app audio settings, which you can use to redirect audio endpoints per app.

Improving search from the taskbar in Windows 10

We’ve recently unveiled two improvements to the search bar in Windows that make it even easier to find what you need.

Click on Search in the taskbar or press the Windows key + S to view an updated design for Search Home. A new two-column layout offers easy readability, as well as fast access to Quick Searches, where you can see local weather, top news, and more helpful info. To find other web results or navigate directly to a website, just type in the search bar like normal.

In addition, the Windows search bar now supports web search for Dutch-speaking customers in the Netherlands. Users with their Windows region set to Netherlands and their language set to Dutch can now search the web from their search bar without using a browser. Previously the feature was limited to English-speaking users in the region.

We welcome your feedback on these updates. You can share your comments by clicking the feedback button on Search Home. 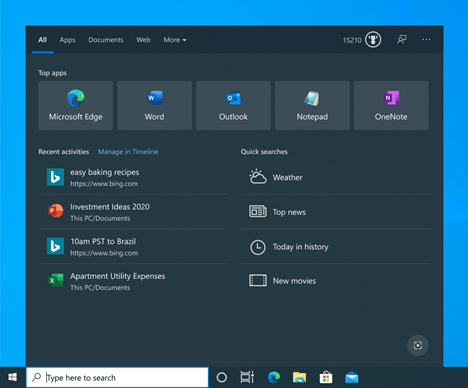 Note: This is a server-side rollout and will be visible to those running Windows 10 version 1809 up to the latest Dev Channel build.