Windows 10 Redstone 4 Build 17133 was highly expected to be the final release for the update version 1803 "Spring Creators Update" after it rolled out to Insiders on the Fast, Slow, and Release Preview rings in a short period of time. However, a new build, Windows 10 Build 17134, is available in the Fast ring.

Microsoft discovered a bug so they delayed the release. The newly released build should resolve it. The official announcement says the following.

Today, we are releasing Windows 10 Insider Preview Build 17134 (RS4) to Windows Insiders in the Fast ring. This build has no new features and includes the fixes from KB4100375 as well as some fixes for general reliability of the OS. As Build 17133 progressed through the rings, we discovered some reliability issues we wanted to fix. In certain cases, these reliability issues could have led to a higher percentage of (BSOD) on PCs for example. Instead of creating a Cumulative Update package to service these issues, we decided to create a new build with the fixes included. This just reinforces that Windows Insiders are critical to helping us find and fix issues before releasing feature updates to all our customers so thank you!

The bug caused reliability issues on computers running build 17133. This made the build unacceptable for signing off as the RTM build of version 1803.

Now that this build has been pushed out to the Fast Ring, you can expect it to roll out to both the Slow Ring, and eventually the Release Preview Ring soon. If it passes testing, it will be released to the stable branch.

If you are an Insider in the Fast Ring, you will get this build 17134 via the built-in Windows Update service. 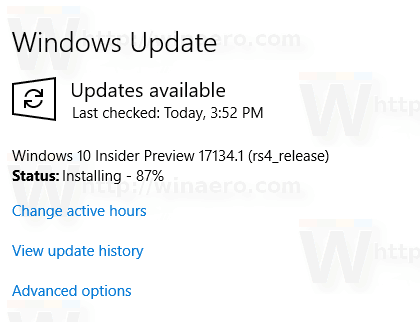 One thought on “Windows 10 Build 17134 is out to the Fast ring, fixes the release-blocking bug”