After quite a long break, Microsoft has resumed their usual cadence for Windows 10 releases on the Insider Fast Ring. A new build, 14926.1000.160910-1529.rs_prerelease, has been released, yesterday night to replace the previous one, which is 14915. Let's see which changes are included in this new build. 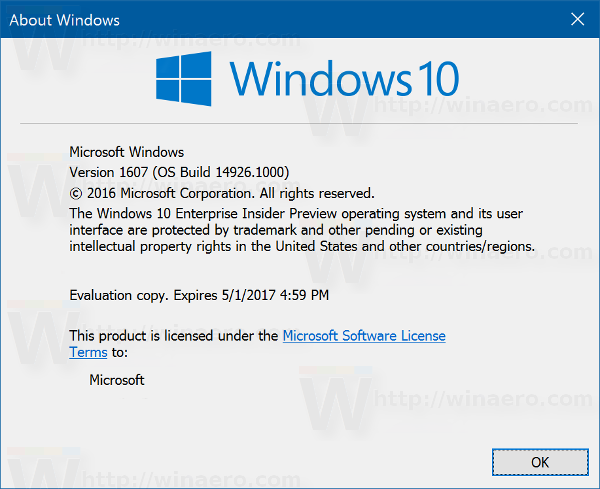 Windows 10 build 14926 comes with some new features. Here is a citation from the official announcement.

Snooze in Microsoft Edge: We know you all love when we get creative with you, so we have added an experimental “Snooze” action on a tab in Microsoft Edge which provides you with a way to set a Cortana reminder on the website you are viewing. People often keep tabs open in their browser indefinitely as a “to do” list, and do not close those tabs until the action associated with that website is complete. This feature lets you put a site into a Cortana reminder that will show up as a notification and in Action Center, allowing you to quickly open that site in Microsoft Edge when you’re ready to get back to it.

Improving your PC upgrade experience: One of the ongoing feedback items we’ve heard is how the apps that come preinstalled with Windows will reinstall after each upgrade – particularly noticeable for our Insiders that receive multiple flights per month. We’ve heard your feedback, and starting with Build 14926, when your PC updates it will check for apps that have been uninstalled, and it will preserve that state once the update has completed. This means if you uninstall any of the apps included in Windows 10 such as the Mail app or Maps app, they will not get reinstalled after you update to a newer build going forward.

Making pin login easier: Ever tried to enter your pin, only to discover the numbers you’ve been typing are nowhere to be seen because Num Lock was off? We’re happy to announce that that will no longer happen! With this build, regardless of your Num Lock state, numbers will be input if you’re typing into the pin password field. Let us know what you think!

Microsoft has provided the list of changes in detail, which is looks as follows.

Besides these changes, build 14926 comes with a list of known issues. It looks as follows.

If you're on the Fast ring, you can get build 14926 by opening Settings -> Update & security -> Windows Update. There, click "Check for updates".