A new build of Windows 10 Insider Preview is out. Participants of the Windows Insiders program can get Windows 10 build 14316 using the built in Windows Update service of the operating system. This build brings a big number of changes, including the Ubuntu Bash console demoed during the Build 2016.

Run native Bash on Ubuntu on Windows: In this build, you can natively run Bash in Windows as announced last week at Build 2016. To do this, you first need to turn on Developer Mode via Settings > Update & security > For developers. Then search for “Windows Features” and choose “Turn Windows features on or off” and enable Windows Subsystem for Linux (Beta). To get Bash installed, open Command Prompt and type “bash”. 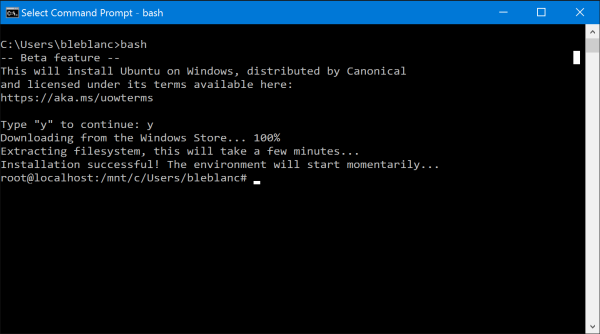 Cortana Cross-Device Features: Starting today, we will be releasing new features to Insiders on an ongoing basis that keeps you in perfect sync across all the devices where you use Cortana to stay connected and never miss a beat throughout your day. With today’s build, we are rolling out the below features. If you are an Insider who doesn’t have a Windows phone, these features will also work with Android devices too but you will need Cortana Version 1.5 or higher (Download here for U.S. and download here for China) for them to work.

Making Cortana easier to setup on your device: If you are in Cortana supported markets and struggled to get Cortana enabled, this will automatically download the necessary speech language, if needed, and enable Cortana for you.

Updated Emoji: We wanted to share some cool work from our design team that is showing up in this build. We are updating the entire set of font-based emoji in Windows 10 that aligns with the Microsoft Design Language with a distinct visual style as well as the Unicode standard.

These new emoji are designed to be detailed, expressive, and playful. Their larger size takes full advantage of every pixel and the two-pixel outline allows for emoji to appear on any color background without loss of fidelity. 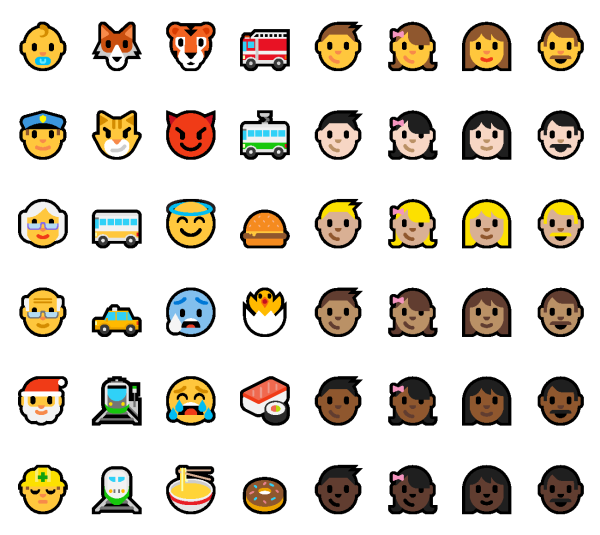 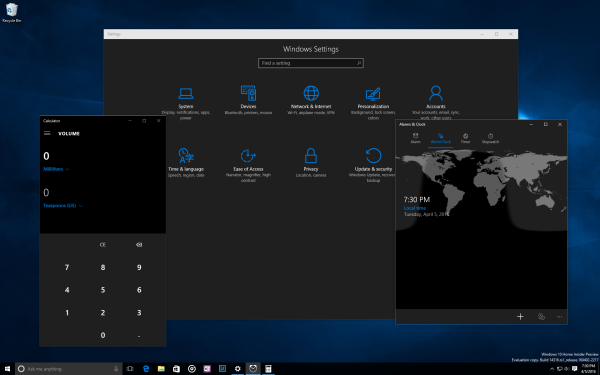 When you switch to dark mode, apps such as Settings, Store, Alarms & Clock, Calculator and other UWP apps that listen and respond to theme changes in the OS will change into dark mode. Some UWP apps that control their own theme settings (separate from Windows) won’t change by toggling this setting. 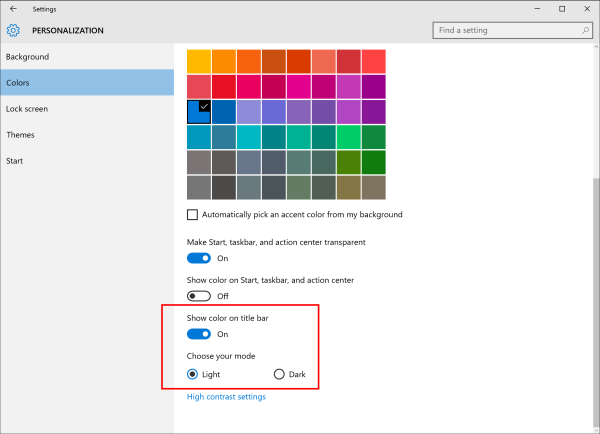 We’ve also added a new option under Settings > Personalization > Colors to show color only on app title bars in addition to the option to show color on Start, the taskbar, and Action Center.

New PC access experience: Using the new Connect app, you can bring the Continuum experience from your phone (a Continuum-enabled Windows 10 phone is required) to the PC without needing a dock or Miracast adapter. Additionally, it also allows other Miracast-enabled PCs to project to other PCs without needing a dock or Miracast adapter as well. The Connect app will mention the ability to use a USB cable to connect to your PC however this is a bug and the app only supports wireless connections on PCs. This is an early preview of this feature – we have more work coming to make the experience even better. 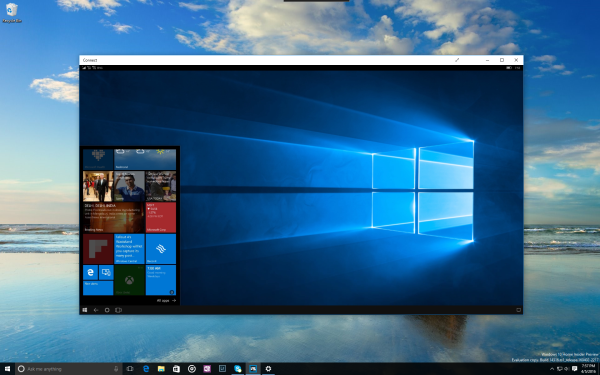 Virtual Desktop Improvements: You can now pin a window so it’s available on every desktop. To do this, launch Task View then right-click on the window you want to pin and choose “Show this window on all desktops”. Try pinning Skype or Groove Music so they’re always at your fingertips. And if you have a multi-mon setup, you might enjoy the ability to have your email app on the second monitor no matter which desktop you switch to. 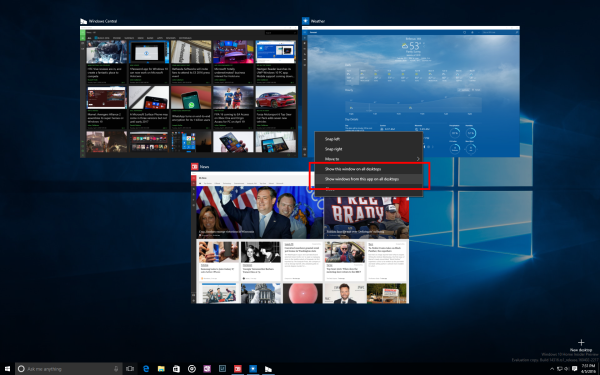 New Update Progress Experience: When you PC installs today’s new build update – you will see a new progress experience for installing the update. This is part of an effort to align the experience of installing updates from Windows Update. 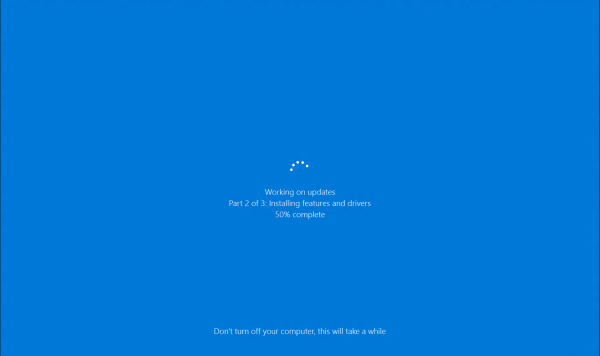 Updated Battery Settings and Battery Saving Experience: We have renamed “Battery Saver” settings page to be “Battery” since we believe a single entry point for all battery related settings including Battery Saver simplifies the user experience. 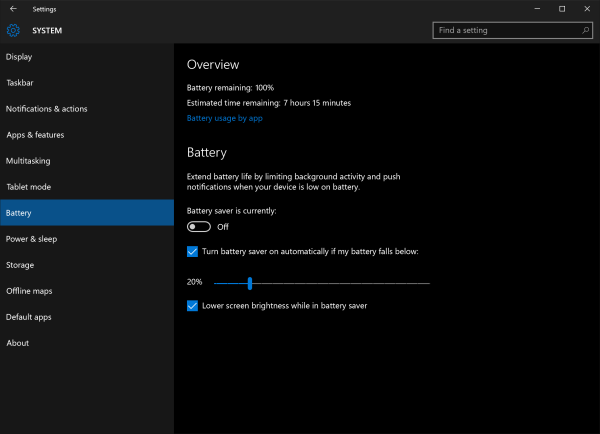 With this option, not only will the app stop running in the background when Battery Saver is enabled, but it will temporarily turn off apps with high battery drain that you haven’t used in a while or pinned to your Start screen till you next launch the application (shown as “Turned off by system” on the Detailed Battery Use page). We also added a prompt asking the user if they’d like to turn on Battery Saver when battery is at 20% – something we had with Windows Phone 8.1 that Insiders wanted to see us re-implement as we merged Battery Sense into the Settings app for both PC and mobile.

Commenting in the Feedback Hub: As we announced at Build last week, we have added the ability to comment on feedback inside the Feedback Hub. You have seen responses from our engineering team in the app already, in what we call “sticky comments”. Those comments are now the top items in a comments thread where you can discuss feedback with each other and us. So in addition to up-voting on feedback, you can now comment on feedback too. We hope you will use the discussion feature to share workarounds, discuss suggestions others have made, and share any new info you have about problems you’re seeing. As always, please let us know what you think by going to Apps & Games > Feedback Hub and joining the discussion! 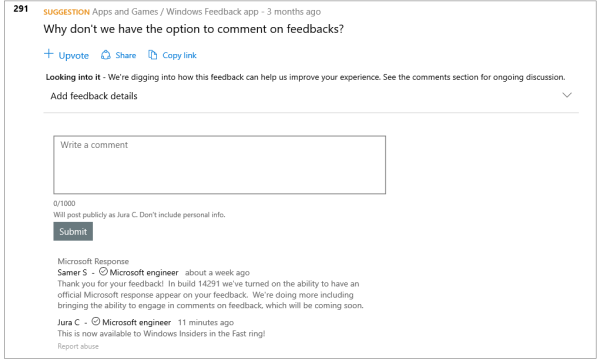 Messaging Everywhere Preview Coming Soon: We will soon be enabling a preview of the “Messaging everywhere” feature in Windows 10 that allows you to send and receive text messages from your phone directly from your Windows 10 PC’s. You will see options for this feature in the Messaging app on PC however an update is required for the Messaging app for Mobile for this experience to work. More to come on this when the experience is live.

What do you think about changes in this build? Share your opinion in comments!