I am excited to roll-out a new Winaero Tweaker. It hits a major milestone in the app's lifecycle, as being the first release which is able to detect Windows 10 version 21H1, and the newest Windows 11. Also, there are several bugfixes and performance improvements.

I even changed the major version number. Can't wait to tell you about the new features.

Contents hide
What's new in Winaero Tweaker 1.20
Initial Windows 11 support
System restore: You can create a restore point right from the app
Disable Automatic Repair Boot loop
Print Screen key sound
Windows Terminal context menus
Windows Tools context menu
Windows Security context menu
Run or modify menu for PS1 files
Other changes
Improvements
Fixes
As always, I would like to say BIG THANKS to each and every Winaero Tweaker user for everything you do make the app better. 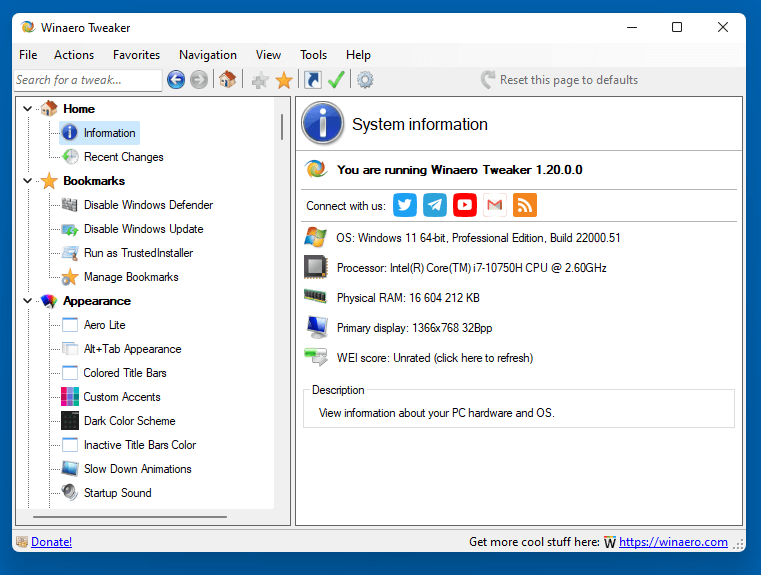 Winaero Tweaker now supports Windows 11. I even added a new tweak that you can use on the first public build to change its taskbar size. You will find it under Desktop and taskbar > Windows 11 taskbar size. 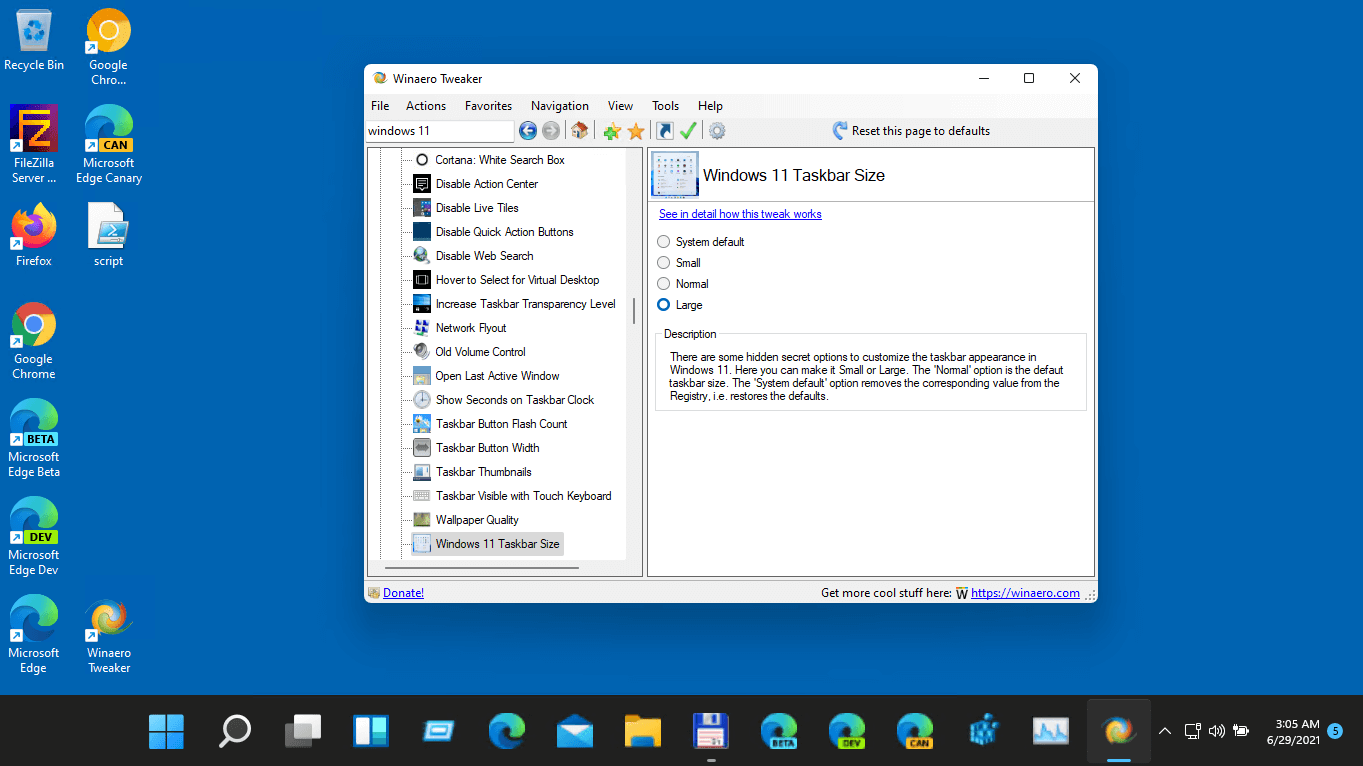 Note: I took all today's screenshots on Windows 11. This doesn't mean that all the new tweaks are exclusive to Windows 11. They are available in previous Windows versions too.

System restore: You can create a restore point right from the app

There have always been many complaints that Winaero Tweaker does not allow you to create a system restore point from its user interface. This has changed, now you can. 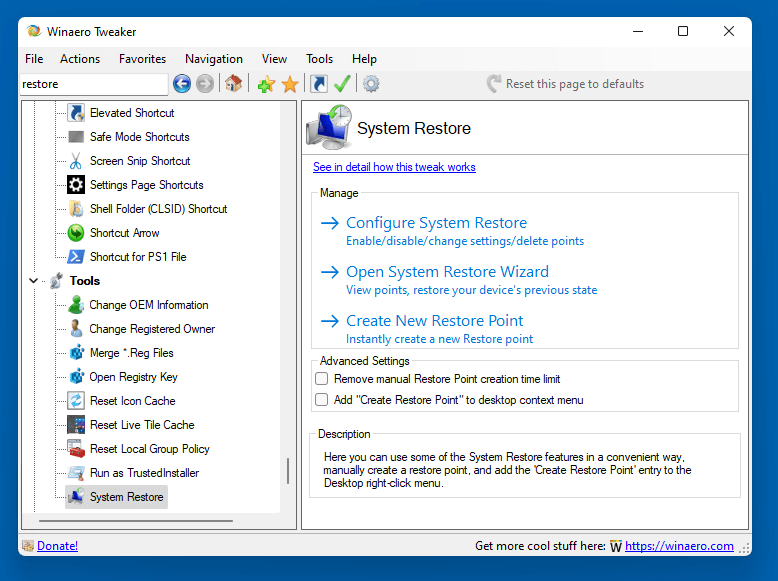 The new tool allows you to create a new restore point, add "create restore point" context menu, and quickly manage its options, all from one place. I tried to create a simple but effective GUI.

This was on demand for long. Finally, Winaero Tweaker will allow you disable the Auto Repair feature in Windows 11, Windows 10, and Windows 8/8.1. If you are not happy to see the Automatic Repair starting each time something happens to your operating system, you can now disable it with ease. 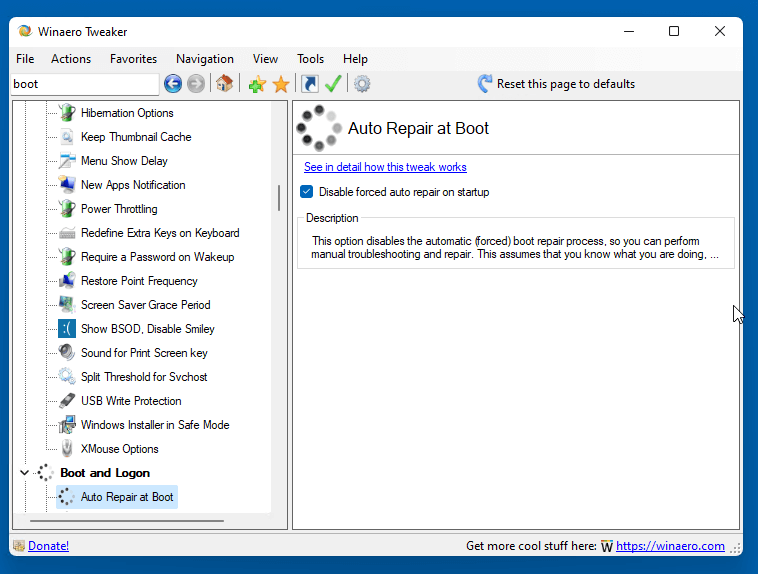 If you want Windows play a sound every time you press Print Screen/Alt + Print Screen keys to capture a screenshot, Winaero Tweaker will allow you to get it done with one click. Just tick this checkbox and you are good to go. 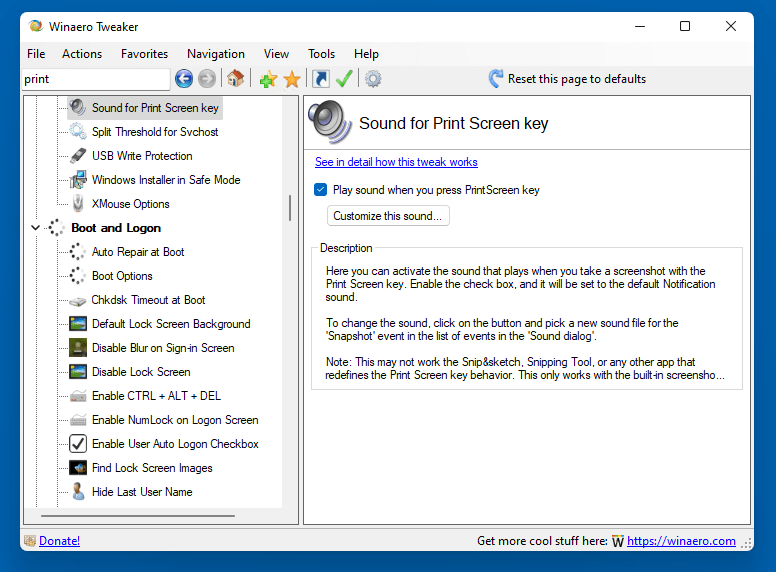 You can also customize the sound. By default it will be set to the Windows Notification sound.

A new set of tweaks allows you to customize context menus for the modern Windows Terminal app. You can hide the default "Open in Windows Terminal" menu entry, or add a cascading menu with profiles. The latter will allow you to open the app to the current folder with the desired profile, such as PowerShell, Command Prompt, PowerShell 7, and WSL. The same can be done as administrator using the appropriate option. Finally, you can make the menu only appear when you press and hold the Shift key. 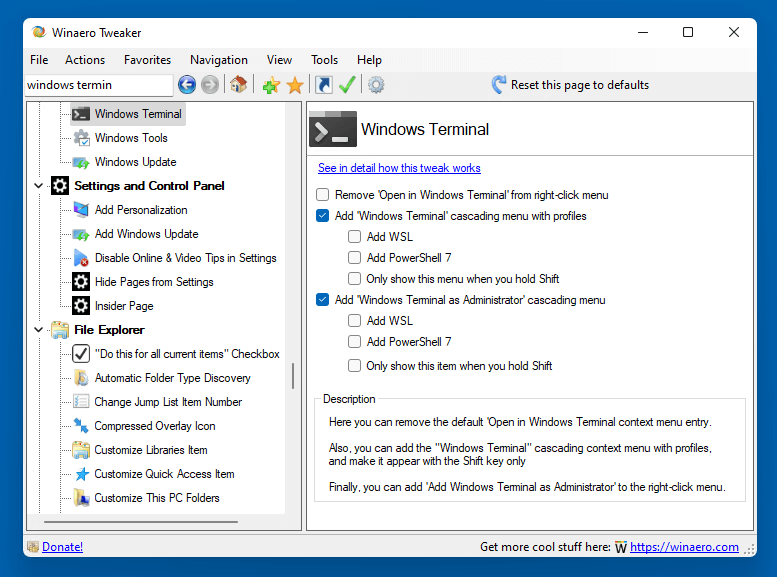 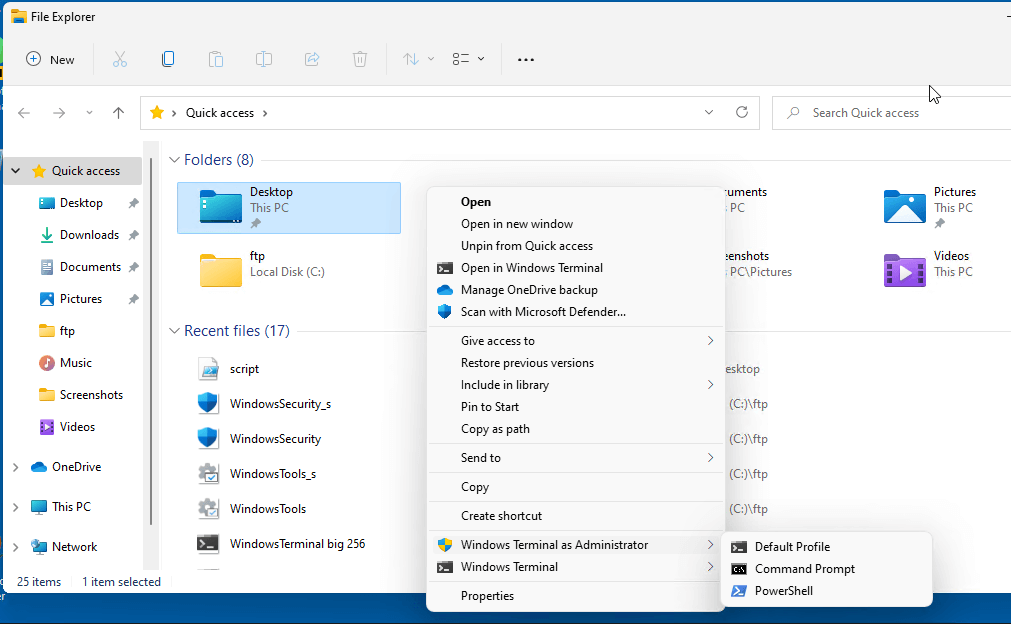 In addition to the desktop shortcut for this new Start menu folder, you can add it right to the Desktop right-click menu. Both are a convenient way to access built-in administrative tools.

Similar to the above, you can add Windows Security to the desktop context menu. It will appear as a cascading entry, so you will be able to access its pages and tools directly. 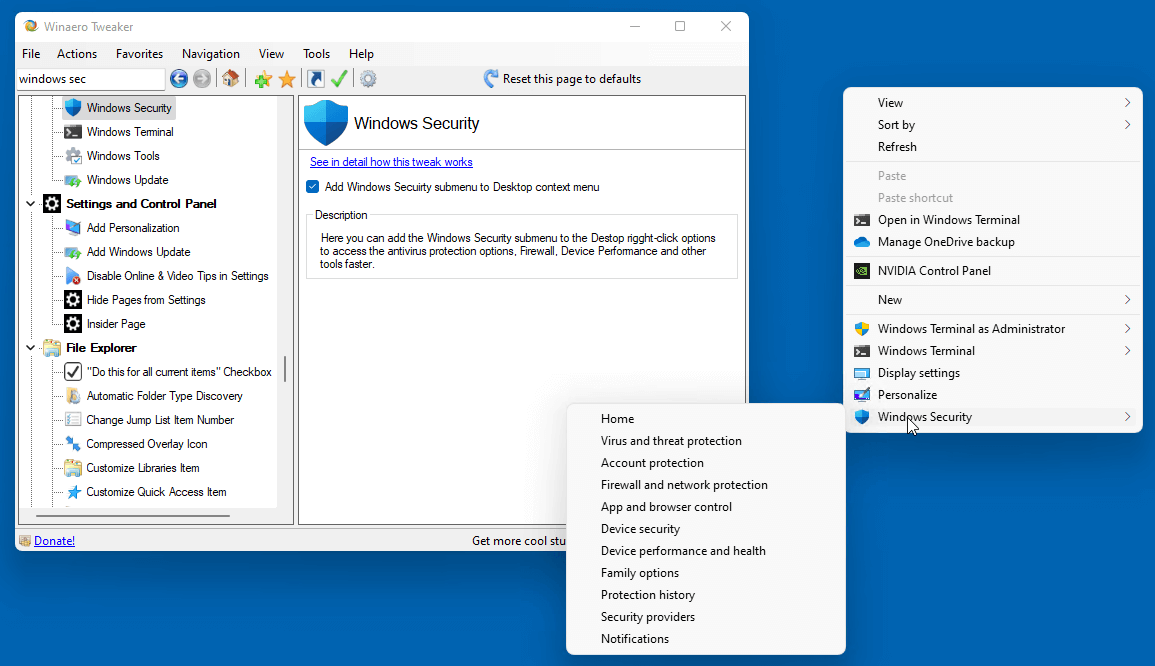 If you often work with PowerShell files, you will find useful the following option. 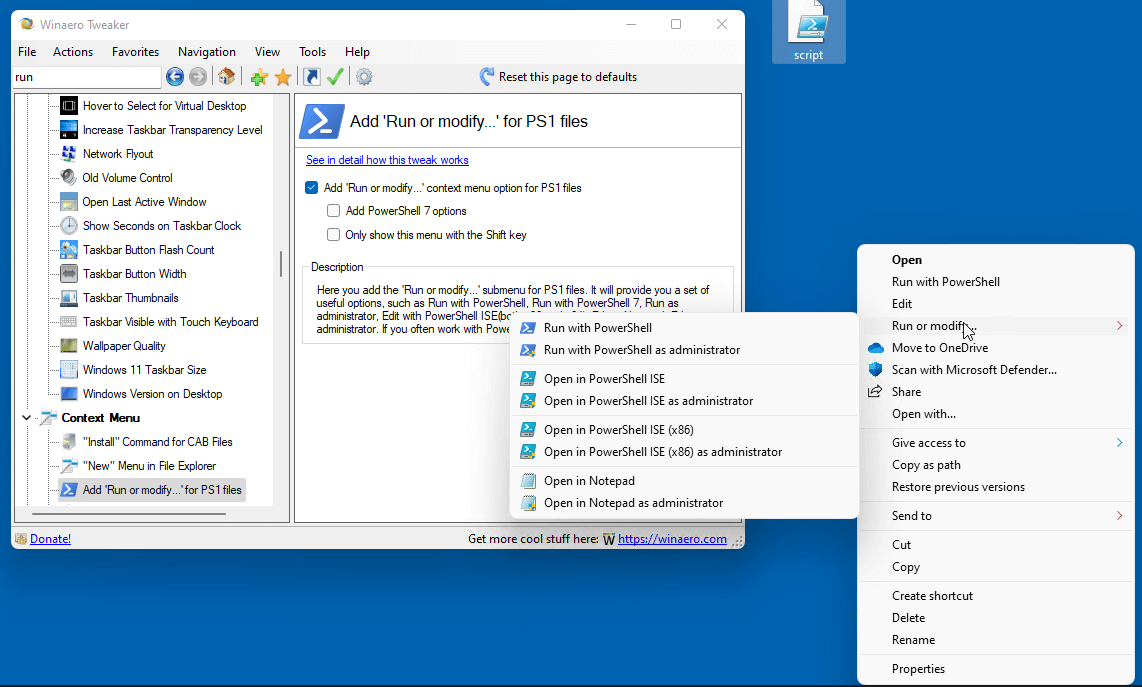 Winaero Tweaker allows you to add a cascading menu for PS1 files which include the ability to edit scripts with Notepad, PowerShell ISE, and run them with either default PowerShell version or PowerShell 7.

Finally, I've added a new toolbar button, Home, which take you back to what you set as your "Home" page in Winaero Tweaker with one click.

As always, I would like to say BIG THANKS to each and every Winaero Tweaker user for everything you do make the app better.

46 thoughts on “Winaero Tweaker 1.20 is out with Windows 11 support and tons of new features”