I am releasing a new version of my freeware, Winaero Tweaker. In this version, I have implemented a number of user suggestions, fixed minor bugs and added new features. Here is the change log.

Lots of Winaero Tweaker users were asking to add this feature. Well, this has finally happened. Winaero Tweaker 0.11 will allow you to revert everything you have changed. Go to the menu File - Reset all tweaks. Uncheck the items you are not going to reset and proceed. 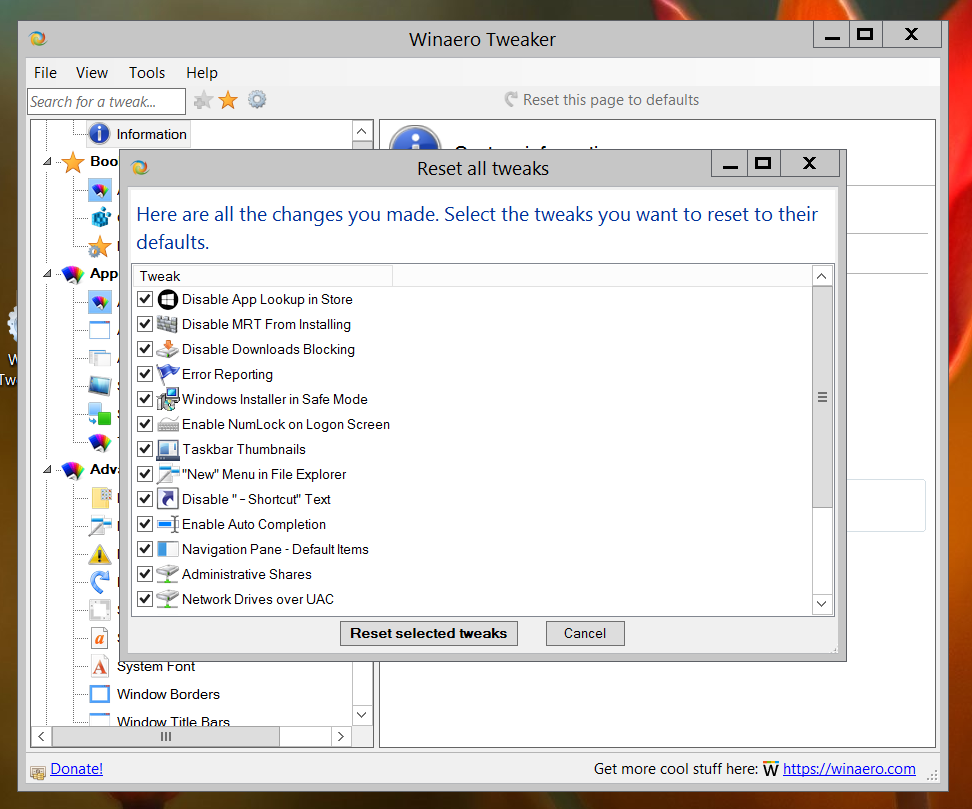 It was another popular feature request. Now it is implemented. The Import/export wizard of Winaero Tweaker allows you to export and import your bookmarks the same way you export/import the tweaks.

This release comes with improvements which allow the app to reliably disable updates and annoying forced reboots in Windows 10. Thanks to my friend Vitaly who spent several sleepless nights fighting with the update mechanism of the OS.

Winaero Tweaker will allow to quickly create a Safe Mode shortcut and/or add it to the Desktop context menu. 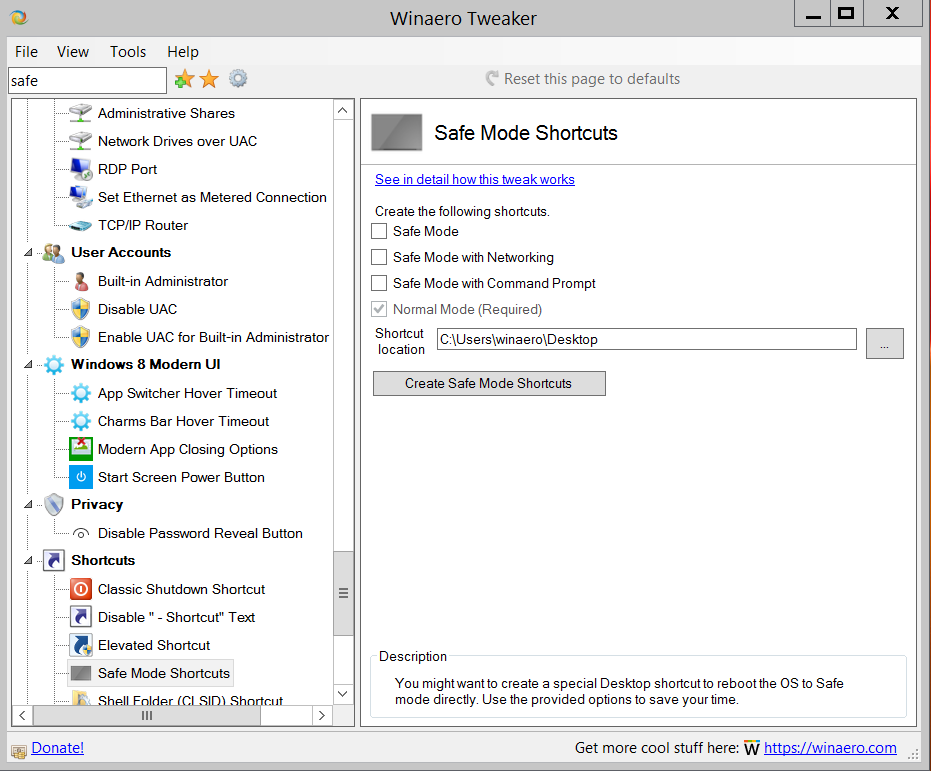 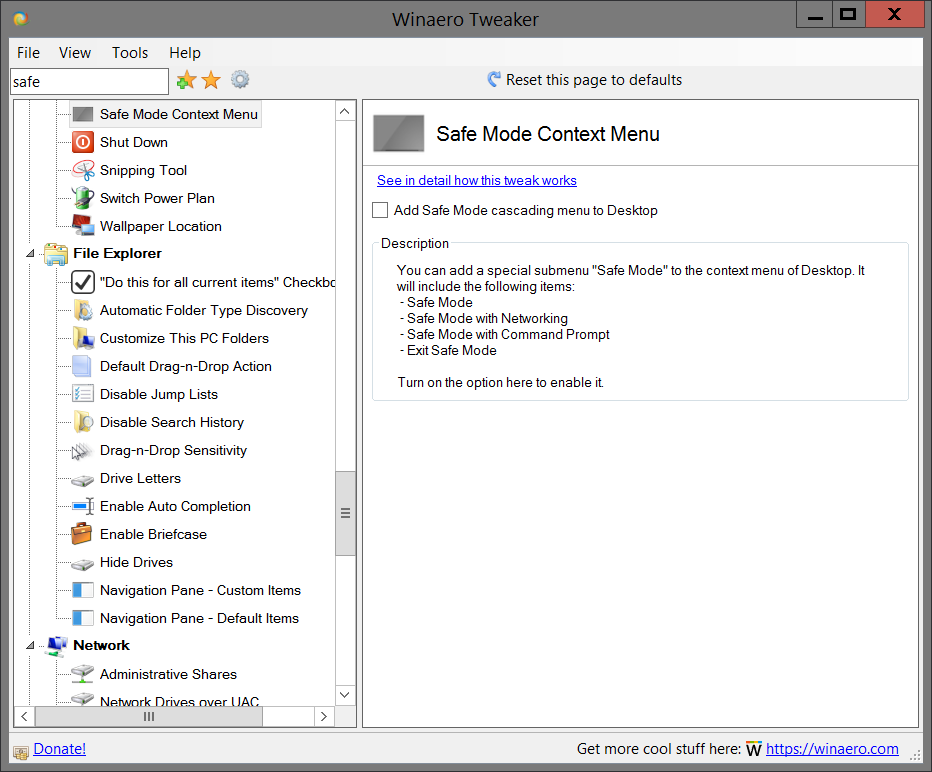 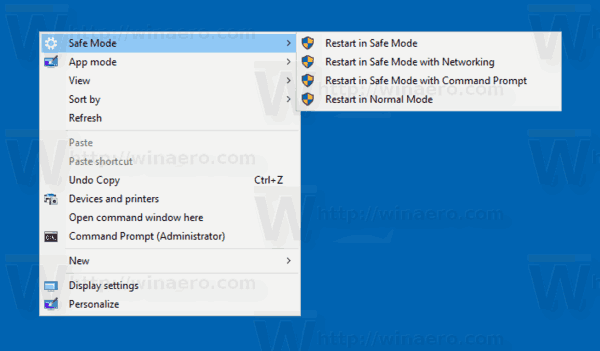 The good old 'Startup Sound' option is now available to Windows 10 users. I made a number of improvements to its code, using ideas implemented in my Ribbon Disabler app. 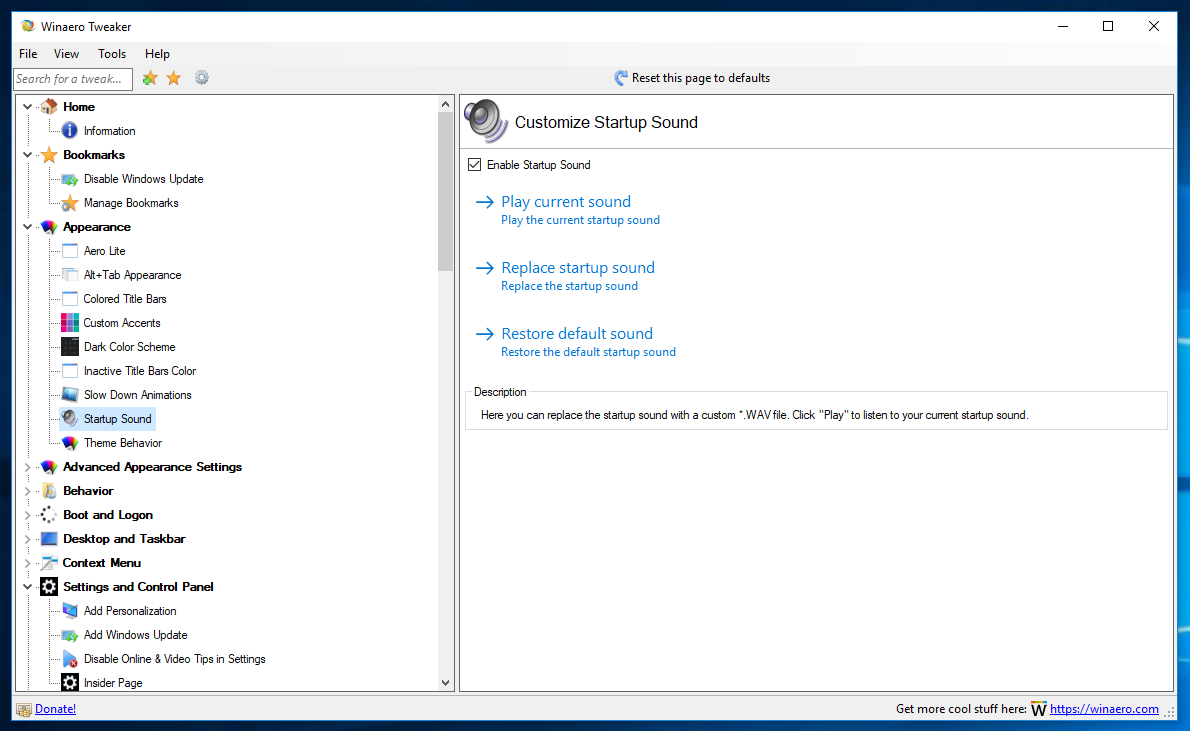 As you may already know, Windows 10 version 1803, known as "April 2018 update" doesn't show computers on your local area network. To save your time, the app includes a quick fix for this issue. 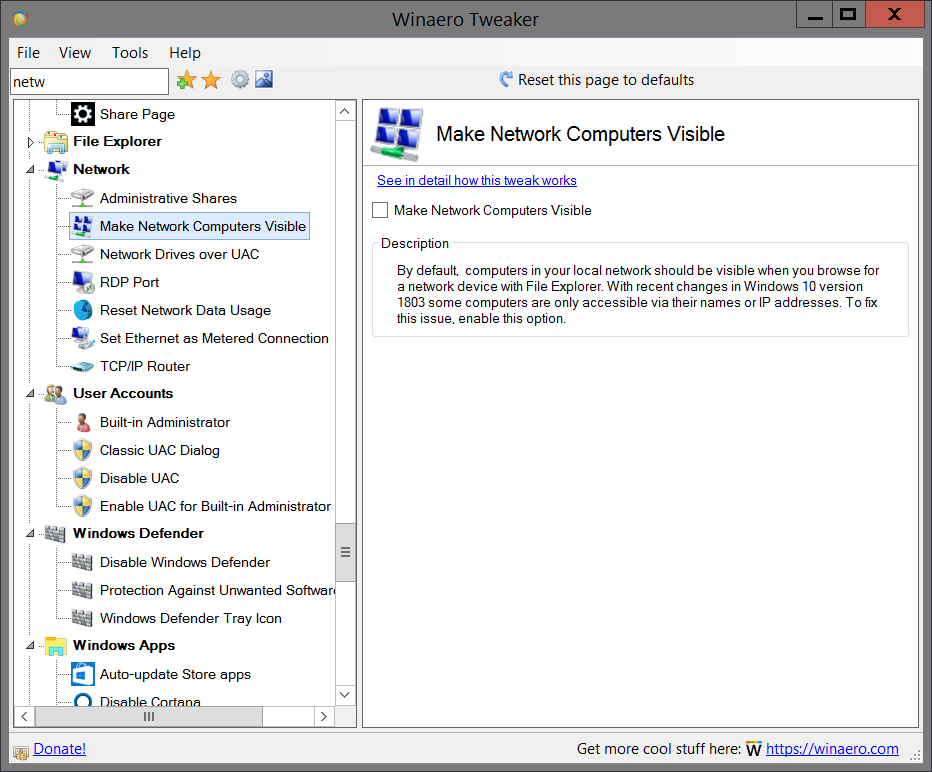 Already using Windows 10 'Redstone 5'? Winaero Tweaker can be used to create a shortcut to the built-in Screen Snip/Screen Sketch feature, and add it to the Desktop context menu. 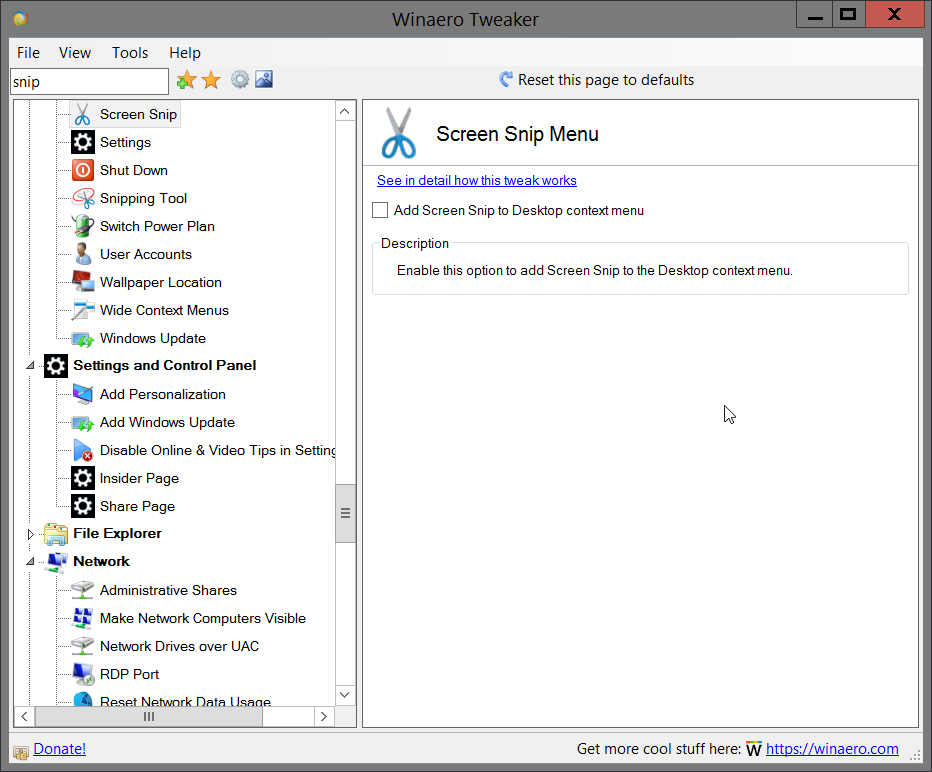 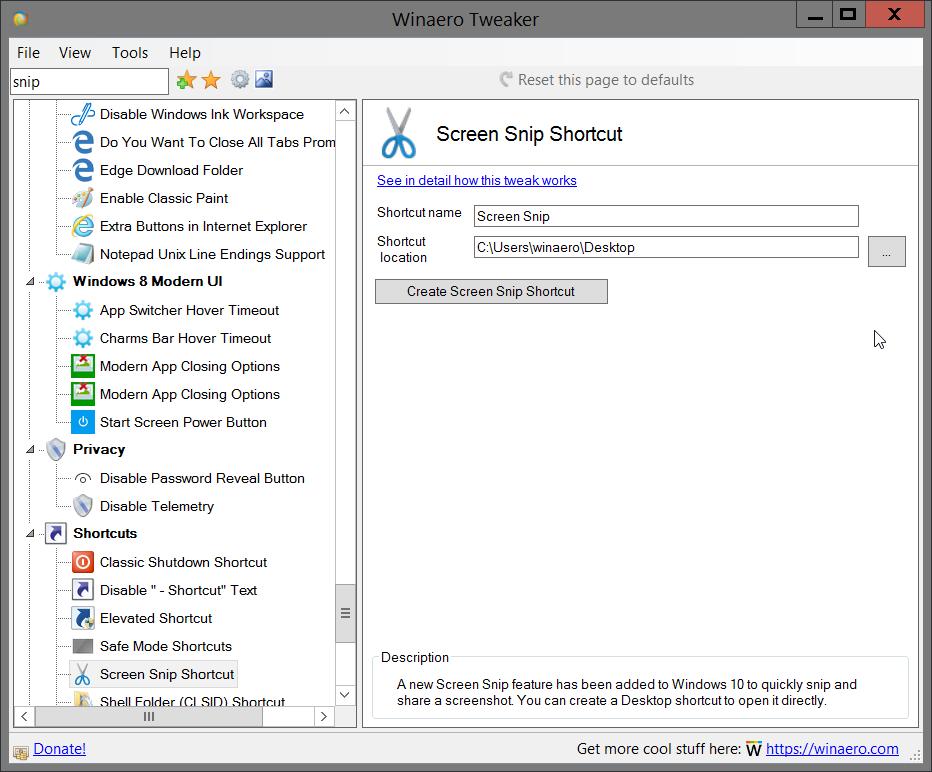 Another frequently requested feature. It is finally implemented in the app, so you can quickly backup and restore the appearance of your Start menu in Windows 10 with a couple of clicks. 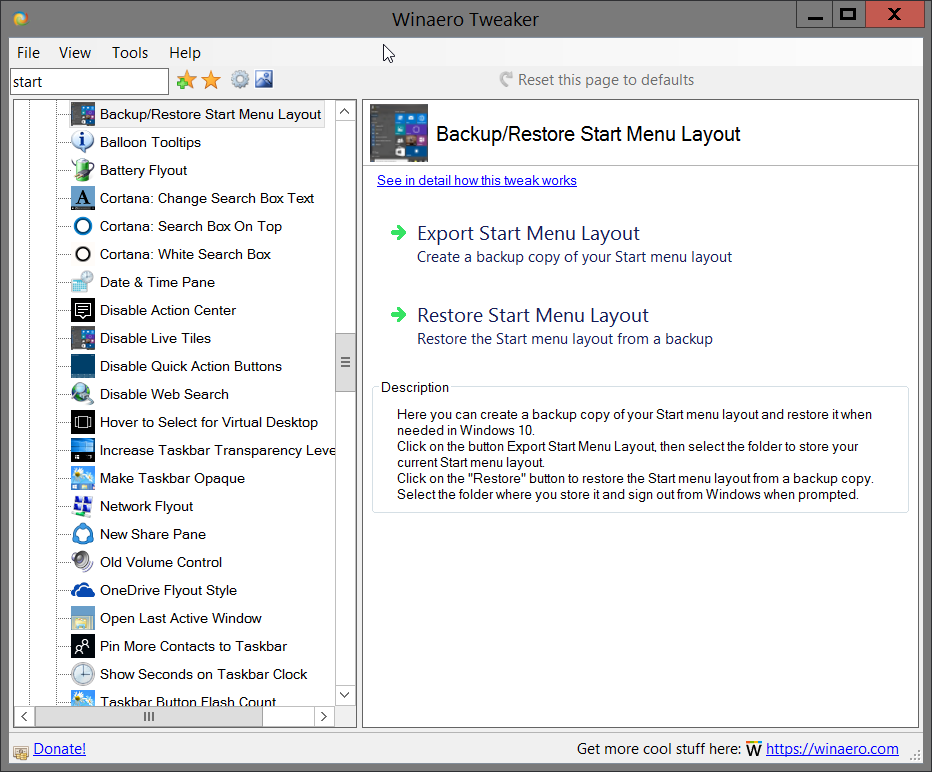 This is one of my favorite features. It allows you to quickly create a shortcut to any shell folder available in Windows. There are lots of shell locations in Windows, that you can access via shell:::{GUID} commands from the "Run" dialog. They are also known as "Shell Folders". Shell folders are ActiveX objects that implement a special virtual folder or a virtual applet. In some cases, they provide access to physical folders on your hard drive or even to special OS functionality like "Minimize all Windows" or the Alt+Tab switcher.

In Winaero Tweaker, click on the button "Select Shell Folders and Create Shortcuts", select one of several Shell Folders in the next dialog, then click on the "Add" button. The app will create shortcuts to the selected items. This way, you can quickly access to your frequently used locations like the Printers folder or Network Connections/Adapter properties. 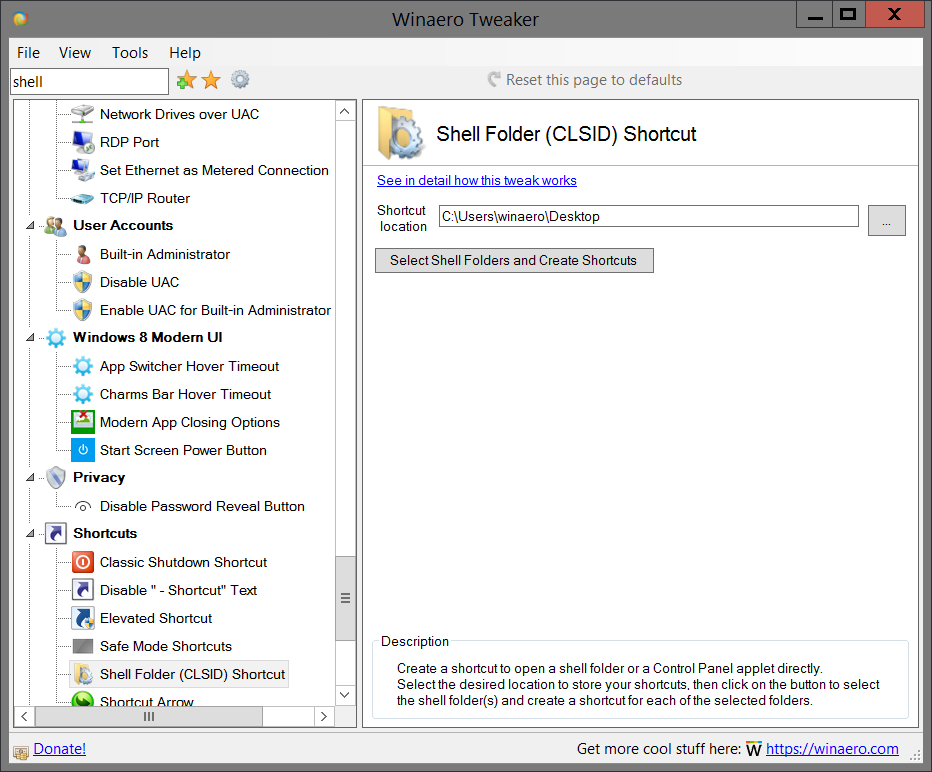 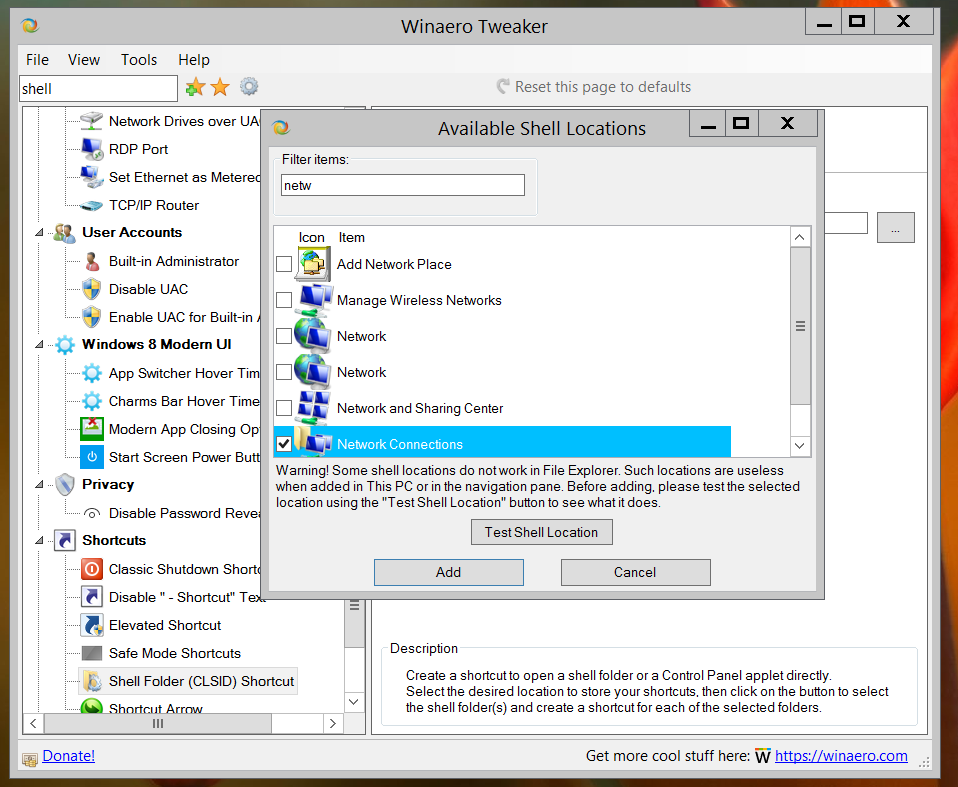 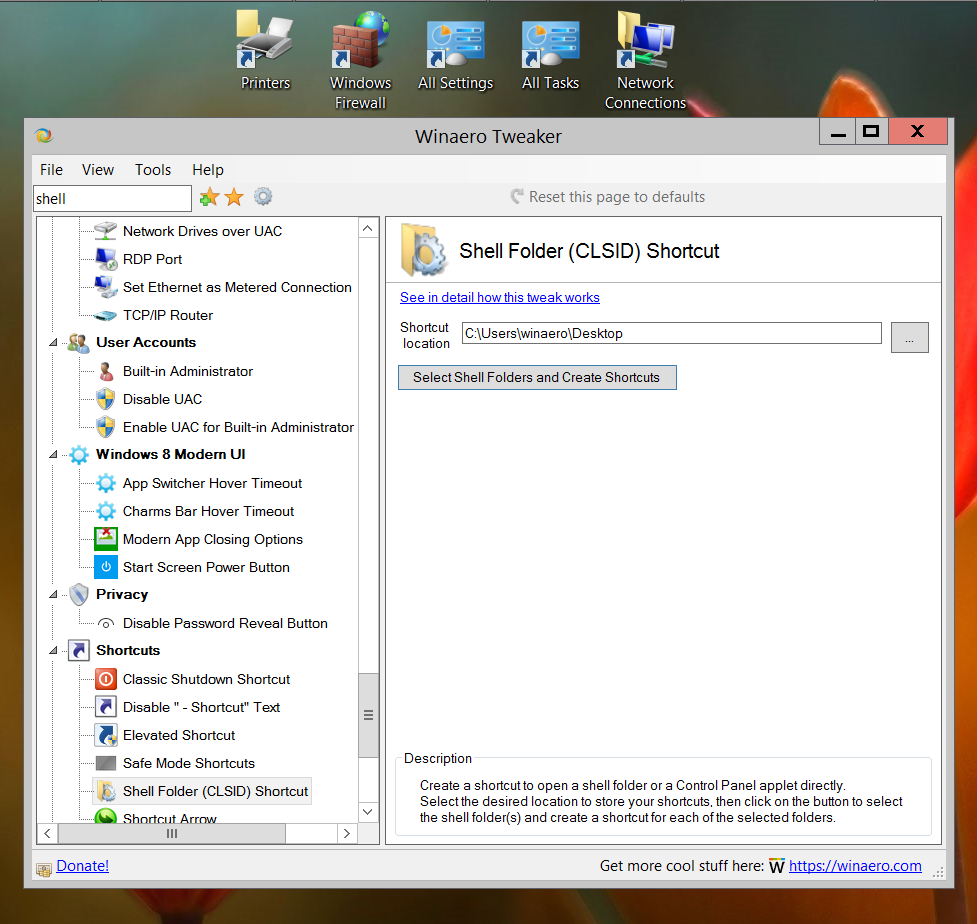 Other Fixes and Changes

I would like to say Thanks to every Winaero Tweaker user. Your support, reports and suggestions are much appreciated!