Microsoft has updated the built-in tool SetupDiag to version 1.6.1.0 is released with 61 rules. It is included in Windows 10 version 21H1. Also, this version of the tool is now available as a standalone tool in the Download Center.

Contents hide
What is SetupDiag
What's new in SetupDiag version 1.6.1.0 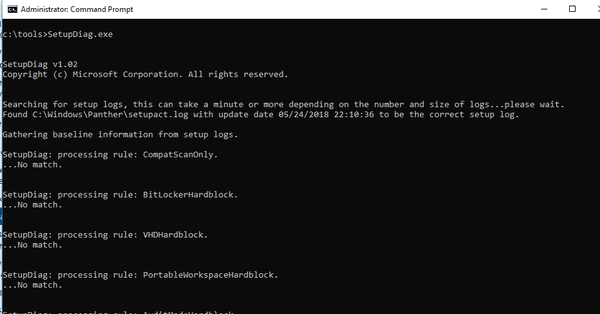 SetupDiag.exe is a standalone diagnostic tool that can be used to obtain details about why a Windows 10 upgrade was unsuccessful.

When Setup fails to upgrade the OS, Windows shows an error code, and terminates the process. More details can usually be found in the setup log. Unfortunately, these logs are not user friendly. It is hard to read and understand what is going on and filter out the successful events. For this purpose, the SetupDiag tool can be used.

SetupDiag works by examining Windows Setup log files. It attempts to parse these log files to determine the root cause of failure to update or upgrade the computer to Windows 10. SetupDiag can be run on the computer that failed to update, or you can export logs from the computer to another location and run SetupDiag in offline mode.

Starting in Windows 10 version 2004, SetupDiag is included in Windows Setup, and can be found under the $Windows.~bt\Sources folder. This allows performing in-place diagnostics and find the reason of the faulty behavior of the Windows Setup program. Even more, Windows will launch it automatically after the upgrade or setup process went wrong.