In our articles, we often mention the about:config command which can be entered in the address bar. That command opens the built-in configuration editor of the Firefox browser and allows performing extreme fine-tuning of the browser. It contains lots of options which are not accessible from the browser's settings interface. Many Firefox users are not even aware that about:config is not the only about: command available in the browser. Firefox comes with a huge set of useful about commands which I would like to share with you today.

Every about: command must be entered in the address bar like URL of a web page:

This list can be changed by Mozilla with a new release of Firefox. You can always check out the list of about: commands available in your browser by entering the following in the address bar: 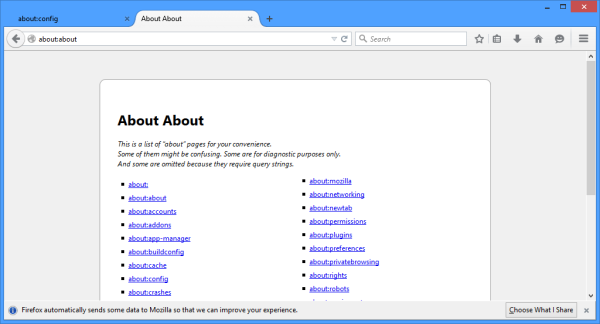 Please note that the following about: URLs that are not listed in the about:about page but exist:

That's it. Bookmark this page for the future to access the full list of about: commands in Firefox.

8 thoughts on “The full list of Firefox about: commands”