On September 22, Microsoft will reveal new Surface hardware, such as redesigned eight-gen Surface Pro, third-gen Surface Go, second-gen Surface Duo, and a new powerful laptop to replace Surface Book. As is usually the case, last-minute leaks shed light. Just a couple of days before the event, Surface Pro 8 specs leak, revealing some exciting hardware upgrades in the next flagship tablet from Microsoft.

According to @Shadow_Leak, Surface Pro 8 will come out with Intel's 11th gen CPUs, swappable SSDs, two Thunderbolt ports (Type-C), Windows 11, and a 13-inch display with 120Hz. 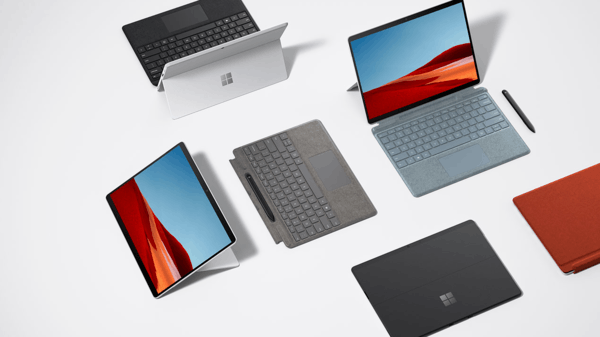 It is worth mentioning that the leaked image shows Surface Pro X with the default Windows 11 wallpaper. We currently do not have official pictures of Surface Pro "8," but Microsoft plans to ship its latest tablet with a redesigned chassis and thinner bezels. Surface Pro 8 will share some design ideas with Surface Pro X, but it won't be identical to the latter. A teaser on the Microsoft website reveals a side profile of what appears to be Surface Pro "8," similar to Surface Pro X.

It is nice to see Microsoft finally bringing some long-overdue hardware upgrades for the Surface Pro lineup. The company is finally ditching the six-year-old design, moves to modern USB-C ports with Thunderbolt support (say goodbye to regular USB-A), and embraces high-refresh screens. Also, users will enjoy quality-of-life improvements, such as easy access to the replaceable SSD drive. Microsoft introduced that feature in Surface Laptop 4, Surface Pro X, and Surface Pro 7 Plus, and now it is coming to consumer-oriented Surface Pro models.

Microsoft will show its latest hardware in full glory on September 22, 2021, at 11 AM ET. The company will stream the event on its official website.