Microsoft has started selling its two long awaited devices. You can now buy Surface Go 3 with LTE support, but only in one configuration. There is also a new Surface Pro 8 with LTE in the Microsoft Store.

Surface Go 3 LTE is only with an Intel Core i3 processor, 8 GB of RAM and a 128 GB drive. This version of the device costs $730. We don't know if the combination of Pentium 6500Y and LTE will become available.

All versions of Surface Go 3 are available in matte black, that resembles the look of the first Surface devices released almost 10 years ago.

This device is part of Microsoft's business lineup. While there is no consumer versions with LTE, Microsoft Store doesn't prevent anyone to get it from the Store. 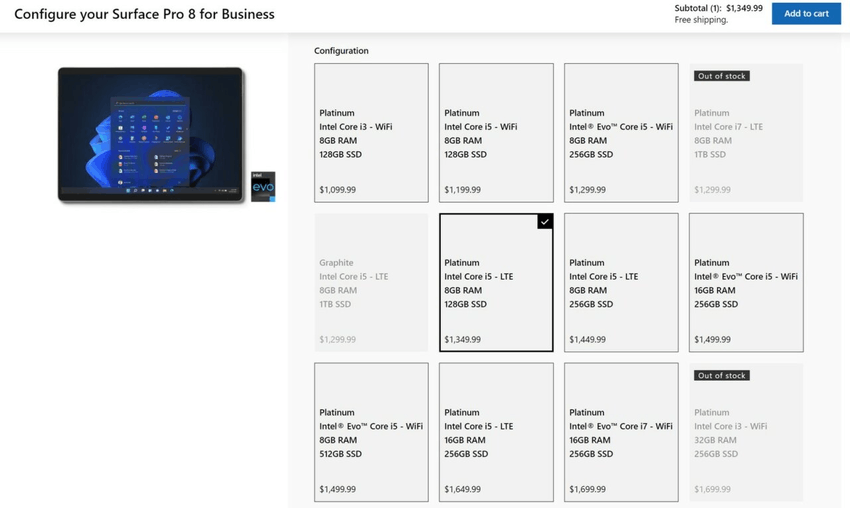 As you could already notice, Microsoft is offering the Surface Pro for the first time with an Intel Core i7 processor and LTE support. In fact, previously released devices had an empty space for an LTE modem only in models with passive cooling. The top device with passive cooling had the Intel Core i5 CPU. But with the Surface Pro 8, the updated internals now host both the fan and the LTE modem.

The Surface Pro 8 with LTE starts at $1,350 for the Intel Core i5 version with 8GB of RAM and 128GB of storage. As of this writing, the devices are only available in platinum colors.