As you may already know, Windows Media Player 12 becomes an optional feature with recent updates to the final version of Windows 10 Fall Creators Update. The app gets removed automatically, so you might want to restore it back in the OS. In this article, we will see how it can be done. 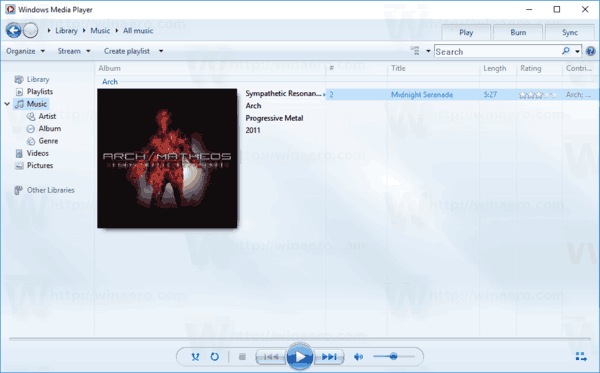 Besides local playback of audio and video content stored on your drive, the player also features integration with the OS Libraries, metadata, ratings and album art management and can handle Internet streams with multicast. It can play media with fast forward, reverse, file markers (if present) and variable playback speed. WMP can also be used to sync content on devices which support Media Transfer Protocol, legally rip audio CDs, or burn a disc. It has a graphic equalizer, subtitle and caption support, plugins which support DSP effects, crossfading and auto volume leveling, auto-playlists and remote control features. Full keyboard-based operation is possible in the player. For video formats, WMP includes universal brightness, contrast, saturation and hue adjustments and pixel aspect ratio control. DVD playback was supported in Windows 7's version of WMP but removed later.

Windows 10 comes with Windows Media Player 12, but it has been improved upon in various ways. Support for FLAC audio, MKV container format and HEVC video was added. Support for the latest IDv3 tag standard for MP3s was also added. Also, the Play To feature was replaced by a greatly improved (Cast To feature) which can use either DLNA or Miracast to stream content to smart TVs and other devices and is more robust and compatible.

In recent Windows versions such as Windows 10, Windows Media Player is not the default app any more because it is not based on UWP. In Windows 10, Groove Music is the new default music player app and Movies & TV is set as the default video player app.

If you are extremely unhappy with Windows Media Player's removal, here is what you can do to restore it.

To restore Windows Media Player in Windows 10, do the following.

Tip: Using this method, you can also remove Windows Media Player from Windows 10. This will free up around 60 MB of space on the system drive - not much. In Settings > Apps > Apps & features > Manage optional features page, select Windows Media Player and click Uninstall to remove it from the OS.

There is an alternative method to add or remove Windows Media Player in Windows 10. It can be done with PowerShell. Here is how.