Today, we'll see how to rename the Libraries folder visible in File Explorer. Windows 10 does not come with an option to change its name, but we can use a special Registry tweak to bypass this limitation.

Libraries is a special folder in Windows, introduced in Windows 7. It allows you to create libraries - special folders which can aggregate files from several different folders and show it under a single, unified view. A library is an indexed location, meaning Windows Search will be completed faster in a library compared to a regular non-indexed folder. In Windows 7, when you opened Explorer using the mouse, it opened the Libraries folder.

By default, Windows 10 comes with the following libraries: 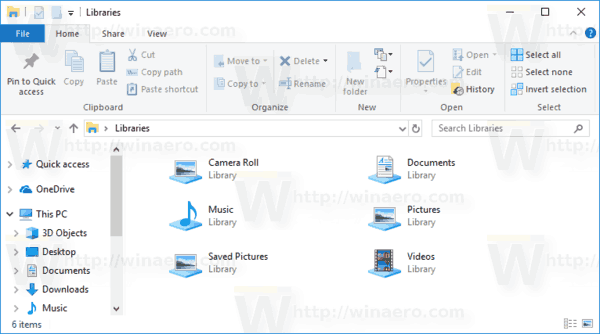 Note: If the Libraries folder is not visible in your File Explorer, see the article:

If you want to rename the Libraries item, here is a very simple Registry tweak that will allow you to do it.

To rename the Libraries folder in Windows 10, do the following.

Voila, the File Explorer app will use your custom icon instead of the default one.
Before:

You can add or remove the following library context menus: