Windows 10X as a special edition of the OS designed for dual-screen PCs. Here are some more details about this upcoming Windows 10 edition.

The Surface Duo device is yet another Microsoft's try to enter the smartphone market. Surface Duo is the dual-screen, foldable Android device.

Windows 10X will be able to run legacy Win32 applications in a container.  Windows Containers isolate software from the host file system. All the file and registry changes required to run an application are packaged into Container Images. It is not clear yet if the Container technology for run Desktop apps will be using Windows Server (shared kernel) or Hyper-V VM containers but since client OSes like Windows 10 only have Hyper-V containers, it is possibly that.

A new leak, first spotted by WalkingCat, reveals the OS internals and marketing goals. According to this finding, Windows 10X is designed for both foldable devices and classic laptops. Local apps and PWAs are said to be on an equal footing under Windows 10X.

Windows 10X is designed with user convenience in mind. An example of this is how the “Quick Settings” implemented in this OS, where a user can find their most frequently used settings.

Another major difference from existing Windows 10 editions is that Start Menu is referred to as a “Launcher”, like the launcher on Android. It is seamlessly integrated with a web search, has a special area of user-pinned apps and shortcuts, and a list of recent and recommended documents.

The lock screen feature has been excluded from the OS, so it is no longer required to press a key or swipe to access the login screen.

Here are some screenshots from the leaked docs: 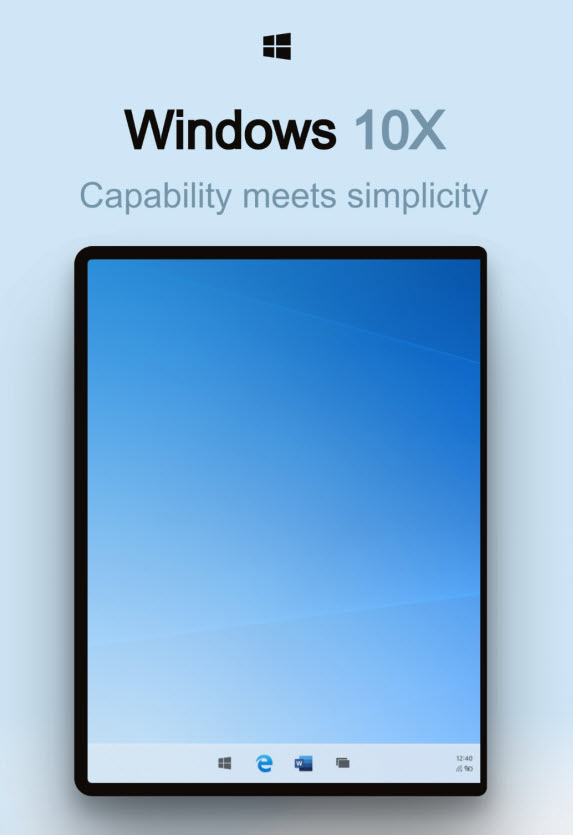 An OS that blends in the background.
Built on an interaction system that lets you focus on the task at hand. 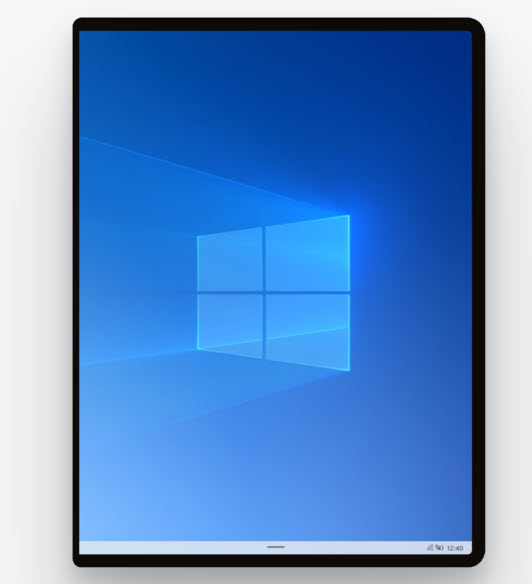 Deliberate approach to the tasks on OS is built for: launching, notifying, searching, and more.
Discover how we approach each task in a simple and efficient manner.

Guided by principles. Inspired by people.
Effortless and magical, we studied our past in order to inform our future. Designed around consumer needs, Santorini adjusts to the way people interact with it.

Patterns, components.
Guidance.
A centralized destination for POR design and documentation with a historical view of the design and decision-making process, aided by research, user testing and technical documentation.

Launcher helps users start and resume tasks quickly. Search is seamlessly integrated with web results, available apps, and specific files on your device. Next up in the hierarchy of content is your default grid app, which can be customized and changed to meet individual needs and preferences. Launcher is opened and further assists in accelerating users with the use of muscle memory over time. And lastly, Recommended content is dynamically updated based on your most frequently and recently used apps, files, and websites. Jump back into your personal workflow without having to start from scratch. 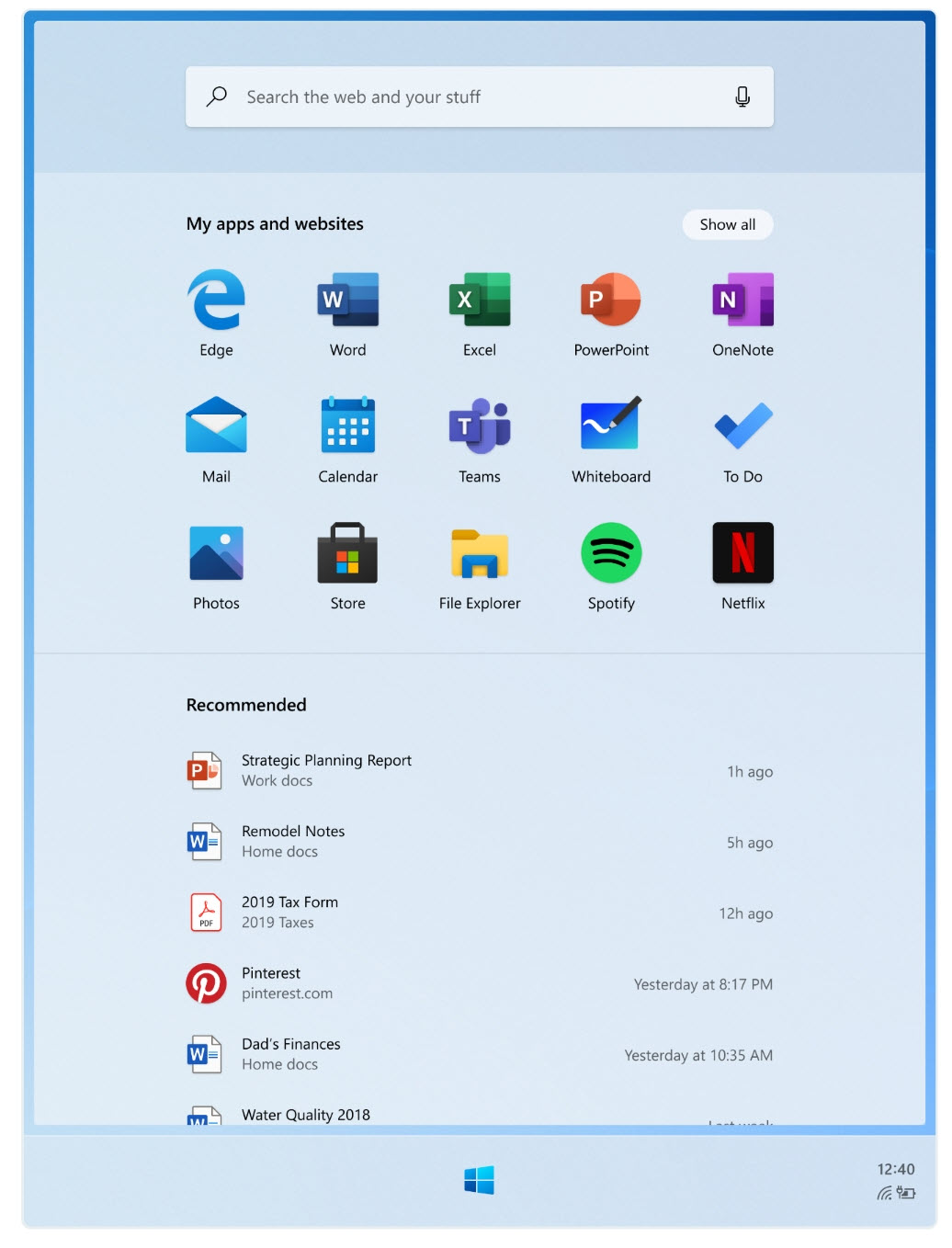 Find what you need on the web, or look for apps and files on your device. A single entry point to search across your device is simple and effortless.

Drag and drop to re-arrange your apps and websites so your favorites are sitting at the top of the list. To get all the other apps, simply expand the grid to “show all.”

Jump back into your flow with recently installed apps; frequently used apps, files, and websites.

• Up to 10 high-confidence recommendations are visible at one time
• If you can not find what you are looking for, tap “Show more” to expand more items inline or,
• “Open the file location” from one of the recommended files to explore related files

Logon has a simple job: get you to your stuff as quickly as possible.
With the Restrained Lock model, when the screen turns on you are immediately brought to a state of authentication; unlike Windows 10 where you first need to dismiss the lock curtain before authenticating. Windows Hello facial recognition as well as Windows Hello PIN during OOBE. Upon waking the device, Windows Hello Face instantly recognizes the user and will immediately transition to their desktop.

At A Glance
Quickly see the state of your device

The quick settings surface has 2 levels of settings: L1 is the main quick surface, while the L2 is available when more lightweight settings detail is required.

• User has access to applications and websites for frequent use
• User has entrypoints to launch Start, Task Switcher, and Quick Actions

For both clamshells and foldables, the taskbar wants the same base model with a series of “levers” which can be used to create some alternative in the model. While we are still building the same initial model, we want to build the levers to the deltas between the two experiences.

The web is where I spend most of my time. I want to access my connected files as they were part of the OS.
All of your stuff, right when you need it. Find all of your files, on or offline in the Recommended section of the Launcher. Explore the connected surfaces in Windows 10X below. 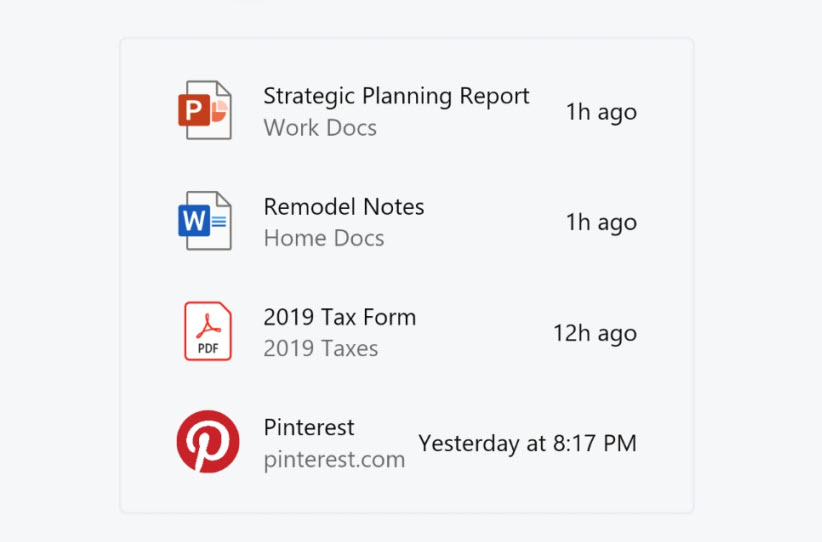 No need for instructions.
The OS is an intuitive blend of windows and the devices I use every day. Pick up Windows 10X and dive back into your tasks.

An OS which adapts to how I use each one of the devices in my ecosystem.
Windows 10X flows with all the tasks throughout my day with 8 different posts to help me get my work done.

A system that celebrates focus and precision by making deliberate aesthetic choices.

A system that does not get in the way and helps me to get what I want faster.