If you are participating in the Windows Insiders program and you have set your PC updates to the Fast Ring, your Windows 10 will be upgraded to a new build. Microsoft has rolled out Windows 10 build 11099 for those who are on the Fast Ring. Here is everything you need to know about this build. 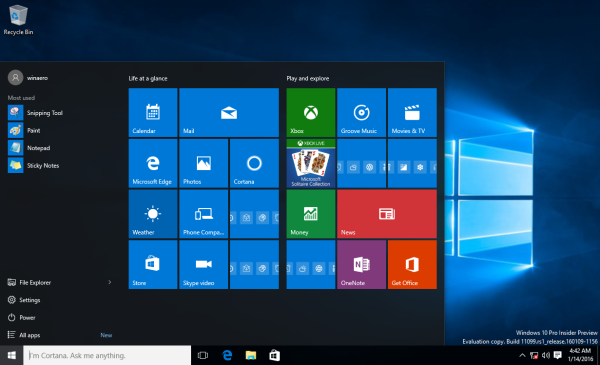 Our focus through the holidays was on structural improvements to OneCore, which is the shared core of Windows across devices. The code refactoring and other engineering work we’ve been doing to optimize OneCore is nearing the point where we will be ready for teams to begin checking in new features and improvements. It will still be a few builds before any really noticeable changes show up, depending on when teams begin lighting up new features in their areas.

So, the next few builds are also likely to come without any user interface changes.

However, at least one minor bug fix is present in build 11099. Copy/Move dialogs are visible once again and work as expected. As you might recollect, in Windows 10 build 11082, they were buggy and didn't appear.

Gabe Aul has informed that from now on, Fast Ring Insiders will get new builds more frequently:

The criteria we use to release builds to Windows Insiders in the Fast ring will be much closer to our criteria for flighting to our internal rings. This will allow more builds to reach Windows Insider. This also means that the builds we release to the Fast ring may include more bugs and other issues that could be slightly more painful for some people to live with.

This means that builds will come faster than before, but will also be less usable for those who always use the most current pre-release build. If you feel that you are not ready to deal with a huge number of bugs or having to download too many new builds frequently, it is a good idea to switch to the Slow Ring upgrade option.

That's it. If you have anything to say about this build or have a question, feel free to comment.