Microsoft is hosting the Windows Insider Bug Bash event, which aims to find bugs in the Windows 11 operating system for the first time. The data collected during this event will help engineers fix issues and make the system more stable before its release this fall. 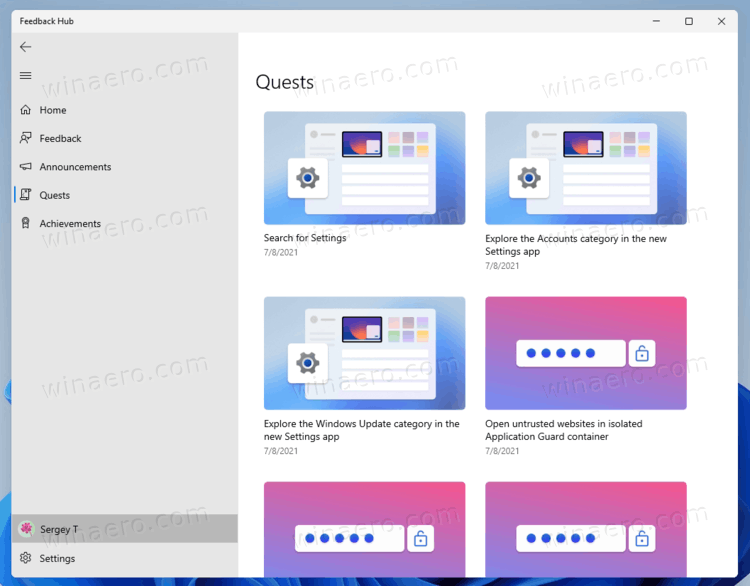 The company has also prepared several Quests to test some key features of the operating system. Windows Insiders can try out these features and give feedback to Microsoft.

The company is going to update the Quest list almost daily. Insiders who participate in the Bug Bush will receive a special badge. It will appear in the Achievements section of the Feedback Hub.
Windows 11 Bug Bash will run from July 7th through July 14th.

If you are interested in participating, then you can open Quests in the Feedback Hub app on Windows 11 and complete them for achievements. Microsoft will reward Windows Insiders with achievements based on participation.

Last week, Microsoft has officially introduced Windows 11 as the next feature update to Windows 10. The company already released a couple of builds to Insiders. Unlike Windows 10, Windows 11 doesn't receive new Dev channel builds every week. Microsoft instead ships cumulative updates. The most recent update is build 22000.65, released yesterday.

The company is yet to release official ISO images, but you can download and build the ISO image for any Windows 11 build manually.

No official release date has been announced, but Microsoft is expected to release Windows 11 in October.