Microsoft has updated the Edge browser with the ability to enter text with voice. The new feature is integrated with the system Dictation feature of Windows 10, so it is a native option.

The new feature comes as a replacement for the similar option in Google Chrome. The key difference here is that the voice input option in Chrome is tied to Google's exclusive API which are not licensed for use in third-party apps, and also only work with Google's websites.

To offer Edge users a similar option, Microsoft has added a shortcut to Edge that simply launches the native Dictation feature of Windows 10. Earlier, Microsoft did the same for Office products.

How to use Voice typing in Microsoft Edge

The Edge option appears in the context menu for any input field in the browser. It can be accessed from the address bar's context menu, or in a comment field on any website. The context menu command lists the Win + H keyboard shortcut, which is the default hotkey for the native Dictation feature. 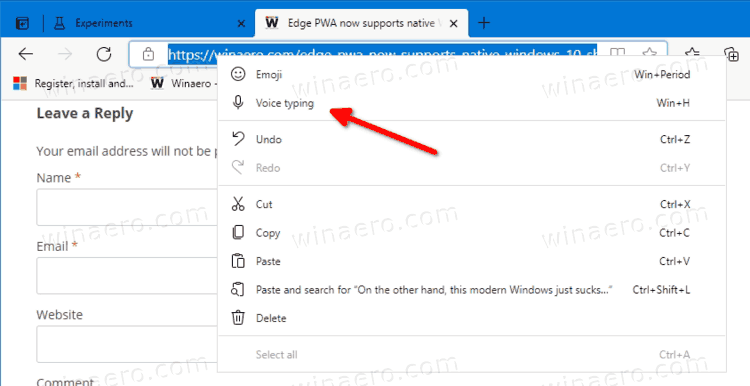 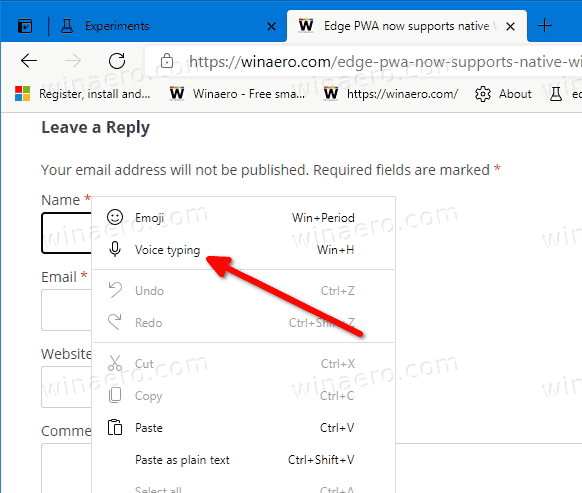 To try this feature, you should install Edge Canary from HERE. Also, you must have a microphone connected.

Microsoft Edge is now a Chromium-based browser with a number of exclusive features like Read Aloud and services tied to Microsoft instead of Google. The browser has already received a few updates, with support for ARM64 devices in Edge Stable 80 and modern Apple M1 chip. Also, Microsoft Edge is still supporting a number of aging Windows versions, including Windows 7, which has already reached its end of support. Check out Windows Versions Supported by Microsoft Edge Chromium. Finally, interested users can download MSI installers for deployment and customization.

For pre-release versions, Microsoft is currently using three channels to deliver updates to Edge Insiders. The Canary channel receives updates daily (except Saturday and Sunday), the Dev channel is getting updates weekly, and the Beta channel is updated every 6 weeks. Microsoft is going to support Edge Chromium on Windows 7, 8.1 and 10, alongside macOS, Linux and mobile apps on iOS and Android. Windows 7 users will receive updates until July 15, 2021.