Deprecation of the DisableAntiSpyware parameter

DisableAntiSpyware is a special option in the Registry and PowerShell that can be used to disable Defender. It is available in all editions of Windows 10, including Home and Pro. Microsoft is changing that, as noticed by Deskmodder.

This setting is discontinued and will be ignored on client devices, as of the August 2020 (version 4.18.2007.8) update to Microsoft Defender Antivirus.

Advanced users and administrators still can use the Group Policy and related options to disable Defender.

There are a number of freeware tools that you can use to save your time, including Winaero Tweaker, that will help you to disable it. 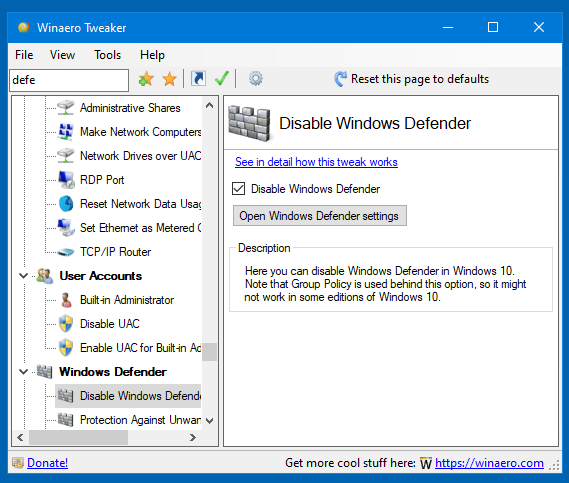 It is not a secret that Microsoft is not interested in users disabling the Defender antivirus, so the company may apply further restrictions, and remove or limit the use of the Group Policy option to certain editions of the OS, leaving consumers without any option to permanently disable the app.

5 thoughts on “Microsoft deprecates the DisableAntiSpyware option to disable Defender”