It looks like Microsoft is desperate to push Windows 10 on every device on the market. It has come to be known that for those of you who have Automatic Updates enabled, the upgrade offer now directly shows them that Windows 10 is ready to install. In a way, it sneakily forces Windows 7 and Windows 8 users to install Windows 10 without the ability to cancel the upgrade. Not only is it already downloaded, but the upgrade prompt is shown straightaway without explicit action from the user.


Some users and websites on the Internet are reporting that they are being shown dialog boxes that offer the free upgrade to Windows 10 but it has no option to opt out, only to defer it. Even worse, some other users have found out that Windows Update shows no other options other than to begin the upgrade to Windows 10. 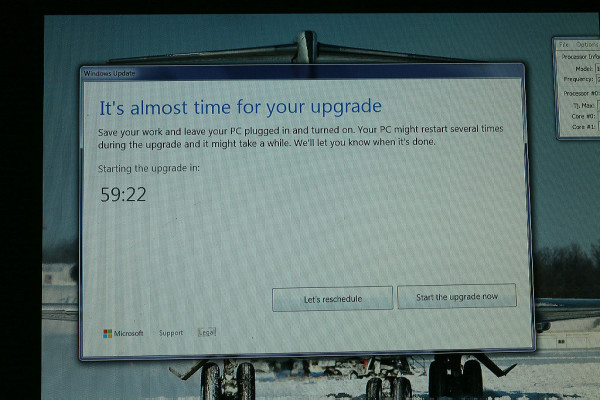 Microsoft is already known for secretly downloading Windows 10 to users' PCs including those who had never opted in to the upgrade. Now, the software giant has decided to go ahead with the next level of forcing the upgrade.

In my opinion, Microsoft has gone too far. This is a dirty move to make users of previous Windows versions move to Windows 10. Such behavior is not acceptable. It looks like someone at Microsoft decided what the user has to run and use but was not concerned with asking what the user wanted. They seem to have forgotten the fact that the user owns his PC. Due to such forced upgrades, the average user who does not know all the ways to bypass the forced upgrade will be unable to avoid the Windows 10 upgrade and have no choice but to move to Windows 10.

As someone who decided to stay with Windows 7 for a while, I did the following:

Disabling Windows Update is extremely insecure solution, but it is better than having to keep up with what updates I need to allow, which ones to hide, uninstall, tweak or disable to avoid the forced Windows 10 upgrade.

At this point, I am happy that I was not lazy to learn the fundamentals of Linux and gradually move to it. I now have the choice to decide what to use and how. I think Microsoft should rethink their upgrade tactics and respect the user's preferences.

Many people have known issues with their hardware and Windows 10, while some others have software incompatibilities which are not detected by the Windows 10 installer.

To escape the forced upgrade, paste this into Notepad, save it as a .BAT file and run it from an elevated command prompt:

After doing this, restart your current version of Windows and hide the above mentioned updates.

Note that every month, you may have to hide these updates as they are automatically getting shown again. Also, there is no guarantee that Microsoft will not issue a new update which will have the same functionality.