When you start an app, the operating system creates a process for an executable file of the app. It contains the program code and its current activity. Windows assigns a special number known as Process Identifier (PID) which is unique for every process. There are a number of reasons you might want to kill a process, and different methods you can use to terminate it. Here is how it can be done.

If an app stops responding, consumes a lot of system resources or behaves unexpectedly and doesn't allow you to quit it, you might want to kill its process to forcefully close the app. Traditionally, Windows allowed using Task Manager and the command prompt for these tasks. In addition to these methods, you can use PowerShell. Here is how.

To kill a process in Windows 10, do the following.

This is Task Manager's most well known method.

Note: The same can be done from the Details tab. It is a special tab which lists process names instead of app names. There you can select a process in the list and either click on the End process button or hit the Del key. 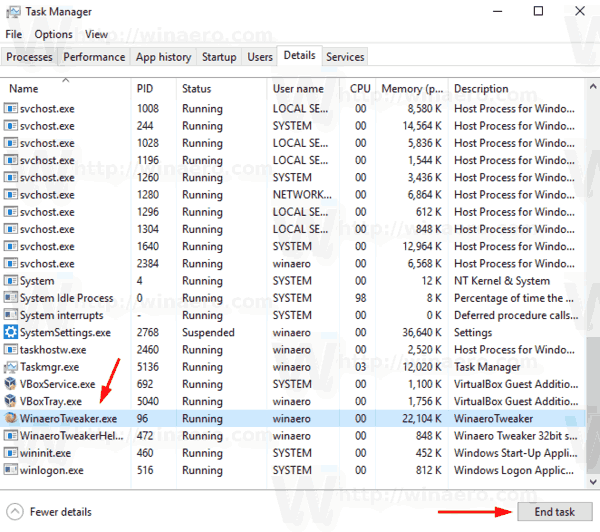 Using the End Task button means Windows first tries to see for a certain timeout if the process has really stopped responding, and attempts to collect a crash or memory dump of the process. It then terminates the app.

Another classic method to close a process is the console tool taskill. It comes bundled with modern versions of Windows.

Note: Some processes are running as Administrator (elevated). In order to kill them, you need to open an elevated command prompt instance.

For example, to kill a process by its PID:

To kill a process by its name:

Taskkill supports many useful options which you can use to terminate apps. You can learn them by running it as follows: taskkill /?. Using taskkill, you can close all not responding tasks at once in Windows 10.

Note: To kill a process which runs elevated, you need to open PowerShell as Administrator.

Examples:
This command will close the notepad.exe process.

The next command will close a process with PID 2137.

If you need to kill a Store app, see the following article:

How to Terminate Store Apps in Windows 10