By the end of the last week, Microsoft Garage Project released a new experimental app named Journal. Journal is a free ink-focused application for Windows 10 with some neat advanced features. In contrast to OneNote, Journal focuses primarily on inking on devices with stylus support, such as Surface Pro 7 or Surface Book. Microsoft says the developers want to "unlock new capabilities not possible with physical paper or seen in today in most inking applications" and "explore how we can push new AI and new interaction techniques to make inking more delightful and accessible." 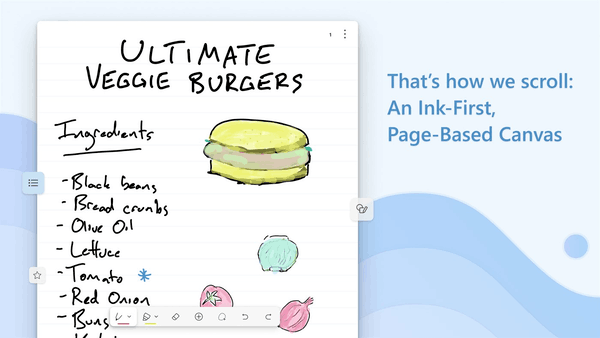 To showcase the most exciting features in Journal, Microsoft has published a new video on YouTube. It shows page-based canvas and different stylus gestures. For example, the app automatically recognizes bullet lists, supports mentions, favorites, handwritten text recognition, search, filters, etc. Also, you can circle handwritten notes and drag-and-drop them into Word or other apps as plain text.

Although OneNote supports similar features, Journal stands out by being more seamless and not requiring switching between modes. In addition to that, many users will find Journal's UI more modern, simple, and convenient to use. There is even Microsoft 365 integration that allows accessing your Calendar from the side panel.

Do note that Journal is a part of Microsoft's experimental Garage project, which means the app's future remains unknown. It may become a fully-fledged standalone app (as Microsoft Launcher for Android did), merge into the existing Office app, or simply bite the dust.

The company uses the Garage Project to showcase new ideas to the public, learn market and user reactions, and figure out what's not worth developing and what's promising. Working with an experimental app also means that you may encounter some bugs or data loss. The developers promise to improve the app with user's feedback in mind.

Unfortunately, Journal is currently available on Windows 10 only. Microsoft does not comment on whether the app will make it to iOS or Android. Read more about Journal and its capabilities on the official website. You can download the app from the Microsoft Store.