Incognito mode is a feature of Google Chrome designed to not record the history of your web surfing. It is similar to the Private browsing mode in Firefox and Internet Explorer. When you open a new Incognito window, Chrome does not retain cookies, temporary internet files, history, and other data related to your browsing activities. When the Incognito mode session window is closed, this data is cleared. Incognito mode can be started via the sandwich menu button or using the keyboard by pressing Ctrl + Shift + N shortcut keys. However, you might want to run Chrome directly in incognito mode via a shortcut or command line. Here's how to do it.

To run Google Chrome in Incognito mode, the browser supports a special command line switch, -incognito, which forces the browser to start with the Incognito window opened instead of the regular browsing session.
The command line must be like this:

Note the hyphen before 'incognito'. You can type the above command directly in the Run dialog (press Win + R shortcut keys on the keyboard and press Enter after typing it). 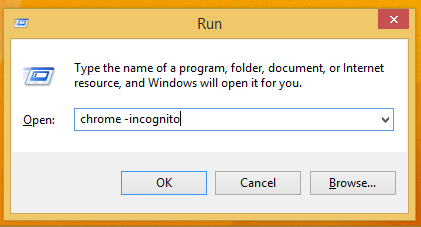 It will work even if you don't enter the full path to chrome.exe because, like other browsers, Google Chrome adds a special run alias to run the browser directly. 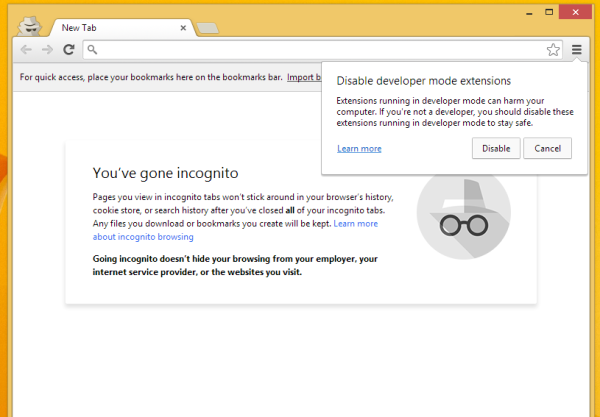 You can create a shortcut to this command and also assign a global hotkey for this shortcut to open Incognito mode directly, as described in this article: Add global hotkeys to launch your favorite applications in Windows 8.1.