First, let's review which apps are bundled with Windows 8 by default. This can be done using the command line interpreter, PowerShell. To open Powershell, open the Start screen (press Win key on the keyboard) and type powershell. When it comes up in the search results, right click on it and choose "Run as administrator" at the bottom of the screen. Or you can also press Ctrl+Shift+Enter to open it as administrator. Opening PowerShell as administrator is important, otherwise, the commands you give will fail. 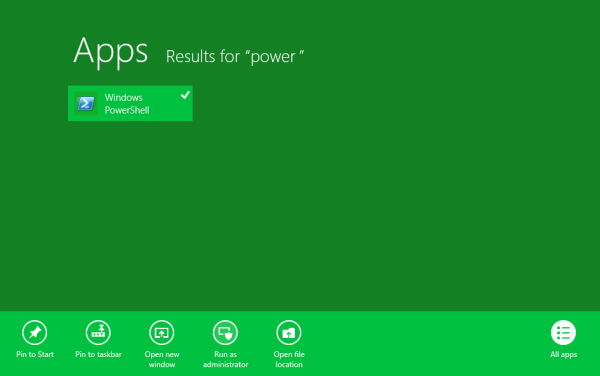 To see which Modern apps you already have, type the following command:

You will see a list of Metro applications for each user.

Note that Staged status means that the application is prepared for installation into each new user account.

So, if we remove them, we will get a completely clean OS without a single Modern app.

This means that all newly created user accounts will come without built-in Modern apps .

Type the following command to remove all Modern apps from the current account:

And here's yet another command you may find useful. Use it to remove all Metro apps from a specific user account that you already have in Windows 8. It's quite similar to the command above, just add -User username part. Substitute the user name of the account for which you wish to remove Modern apps in the command line in place of <username>.

Finally, here's a command that will remove Metro apps for all users:

That's it! If you are scared that you lose all Modern apps forever, don't worry - you will be able to install them back via Windows Store. You may get errors about Windows Store and PC Settings (Immersive Control Panel) unable to be removed. That's normal since they are part of Windows and cannot be uninstalled on a per-user basis.

Be sure to tell us in the comments whether Modern apps have been useful to you, including the extremely simple built-in ones and whether you plan to remove them.