How to Play Surf Game in Microsoft Edge 83 Stable

With release of Microsoft Edge 83 in the stable branch, Microsoft has made the hidden built-in game available to everyone. Previously, the game was only available in Canary, Dev and Beta preview versions of the browser.

The Surf game, first introduced as an Easter Egg, is a simple game where you have to avoid obstacles. There are krakens to make you crash and hearts you should collect to extend your life score. There are some bonuses, and game modes.

Microsoft notes the following features of the game in Edge 83.

In the game menu, you can pick a different game mode, turn on or off High visibility mode and Reduced speed mode, or start a new game. 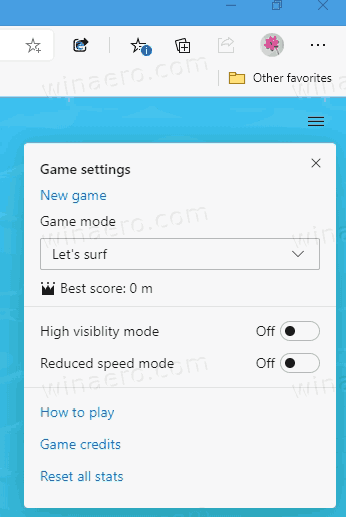