Mozilla has released Firefox 92 to the stable branch. You won't a lot of new features in this version. Instead, there are performance improvements made to the accessibility tools, security fixes, and a few improvements for Mac users. 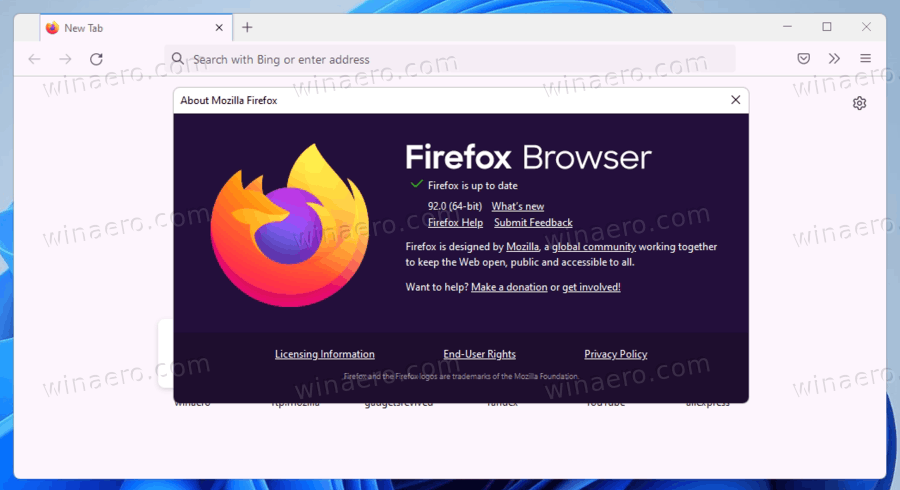 Here are the most important changes in this release.

First of all, the browser has a reworked accessibility tools functionality. It no longer affects the Firefox performance when used with a screen reader app.

Second, WebRender is now activated on all systems by default. It is enabled on all supported operating systems and device types, including Windows and Android. Earlier, its was only enabled by default on Mac OS X and on some Linux distributions, leaving Windows, the most popular desktop platform, alone in the dark.

How to check if WebRender is enabled for you

An option in about:config, gfx.webrender.software, can be used to enable or disable WebRender. Mozilla plans to deprecate it in Firefox 93, so it will remain permanently enabled.

After making the HTTPS-First Policy for Private mode enabled by default, Mozilla continues their work in this direction. Firefox 92 comes with the integrated support for auto-switching to HTTPS using HTTPS RR with Alt-Svc headers. Such a header allows a server to indicate that a particular resource should be loaded from a different server — while still appearing to the user as if were loaded from the same server.

You can download Firefox 92 from its official web site.