Mozilla has released Firefox 85 to the stable branch. It is a major release of the browser, that is notable for a number of important changes. To name a few, there is the ability remove all saved logins at once, better security, bookmark UI improvements, and you can no longer use Flash.

Firefox is a popular web browser with its own rendering engine, which is very rare in the Chromium-based browser world. Since 2017, Firefox has the Quantum engine which comes with a refined user interface, codenamed "Photon".

The browser doesn't include support for XUL-based add-ons any more, so all of the classic add-ons are deprecated and incompatible. Check out Must have add-ons for Firefox Quantum.

Firefox today reached version 85. In addition, a there is a new ESR version 78.7.0. Firefox 86, which is scheduled the release on February 23rd, will enter beta testing in the next few hours.

The release comes with the following important changes.

Firefox 85 includes a number of user interface improvements made to Bookmark. Now it automatically shows the Bookmarks bar on a new tab page.

In addition, Firefox will now remember the last used bookmark folder and pre-selects it by default when you create a new bookmark.

Also, the default location is now "Bookmarks bar" and not the "Other bookmarks" section, as it used to be.

The built-in password manager in Firefox now provides the ability to delete all saved account data at once, without the need to separately delete each item in the list. It is available via the menu button with three dots "...". 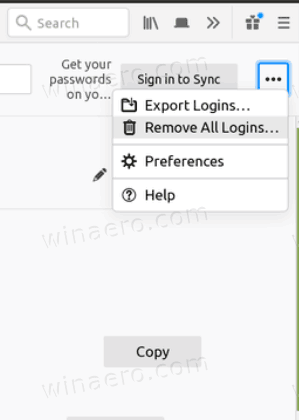 On Linux, the WebRender compositing engine is enabled by default for the GNOME desktop environment session with Wayland. In the previous release, WebRender support was activated for GNOME in the X11 environment. The use of WebRender on Linux is still limited to AMD and Intel graphics cards, as there are unresolved problems when working on systems with the proprietary NVIDIA driver and the free Noveau driver.

There is no Flash support anymore

The Adobe Flash plugin support has been removed. The Flash technology support was officially terminated by Adobe on December 31, 2020. In fact, the ability to use the Adobe Flash plug-in was disabled by default back in Firefox 69, but there was an option to enable Flash for specific websites.

Flash was the last NPAPI plugin supported in Firefox. Support for other NPAPI plugins like Silverlight, Java, and multimedia codecs was removed in Firefox 52, which was released in 2016.

In addition to changes and improvements, there are 33 fixed vulnerabilities, including 25 dangerous. 23 vulnerabilities (compiled for CVE-2021-23964 and CVE-2021-23965) were caused by memory addressing issues such as buffer overflows and access to already freed memory. These issues could potentially lead to the execution of attacker code when opening a malformed website.

1 thought on “Firefox 85 released with the following changes”