A couple of months ago, Microsoft updated the roadmap for Edge, providing more information about the upcoming changes and new features. According to Microsoft, Edge 94 is on track to receive a significant update for the built-in PDF Viewer. One of the biggest changes coming soon is the free-form text boxes support. Microsoft is now rolling out the feature for a limited set of Edge Insiders in the Canary Channel. It is a part of Controlled Feature Rollout, which means not all users are getting access to new capabilities right away, but Microsoft will increase the testing scope once Edge 94 gets closer to the public release.

It appears that the free-form text boxes support in the PDF Viewer in Microsoft Edge is available in build 94.0.988.0 and newer. Update the browser to the latest version, then open any PDF file in Edge Canary. If your copy of Edge received the new feature, you would spot the "Add Text" button on the toolbar. 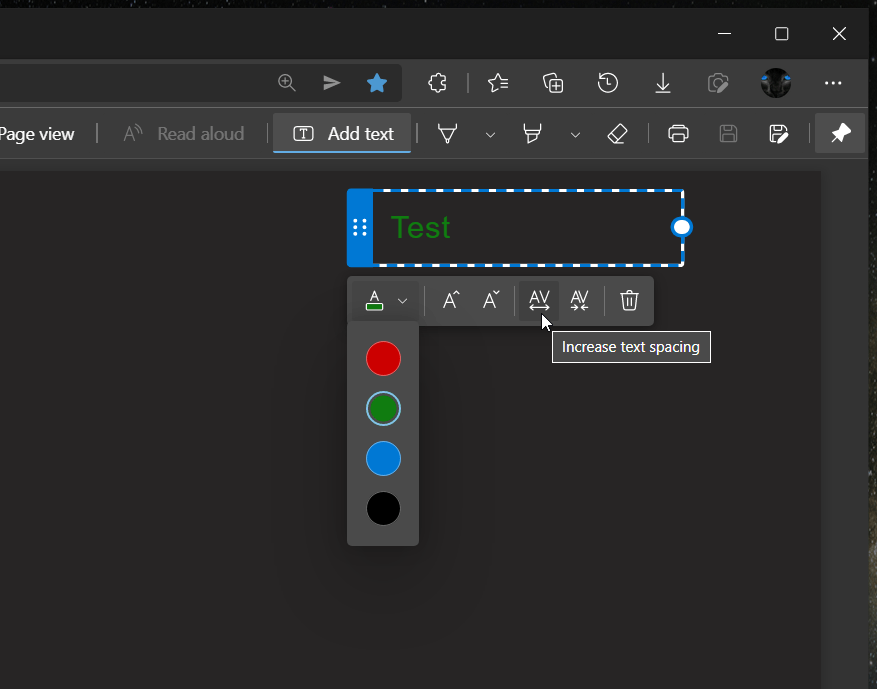 For now, text editing capabilities for free-form text boxes in PDF documents are somewhat limited. You can change the text size, select from four built-in colors, and increase or decrease the spacing between characters. The browser does not allow you to change the font or select custom colors. Still, for most users, that set of features in Microsoft Edge will be more than enough to cover basic PDF editing needs.

As of now, Microsoft Edge 94 is available in the Canary and Dev channels. Microsoft plans to ship Edge 94 in the Beta Channel on the first week of September 2021, with the public release to follow at the end of the month. It is also worth mentioning that Edge 94 changes the update cadence. Starting next month, Microsoft will be shipping major updates for Edge Stable every four weeks instead of six.