As you may already know, Windows 10 comes with its own Store app. Like Android has Google Play, and there's the App Store in iOS, the Microsoft Store app (formerly Windows Store) adds the ability to deliver digital content to the end user in Windows. With a recent update, Microsoft Store allows disabling video autoplay for videos, TV shows and games.

When you browse for a game or TV show in the Store, its promotional video can start playing automatically on the app's page. While it is easy to pause it by clicking anywhere on the video, this can be really annoying. If you wish, you can turn off video autoplay in the Microsoft Store. Here is how it can be done. 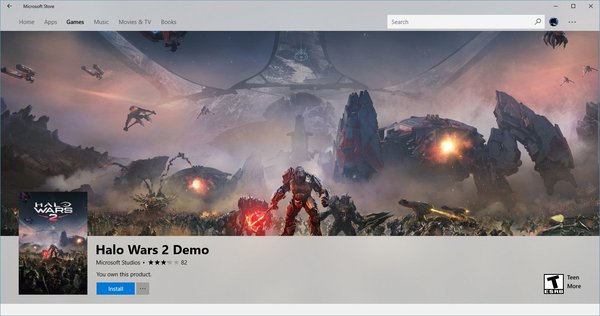 Note: The option covered below won't disable autoplay for all types of video content available in the Store. For instance, background videos that play for a movie or a TV show opened in the Microsoft Store app will continue to play automatically.

To disable video autoplay in Microsoft Store, do the following.

That's it. You just disabled the Video Autoplay feature in Microsoft Store.

To restore the default behavior, enable the option Video Autoplay using the Settings dialog of the Store as described above.

Recently, Microsoft rebranded the built-in content delivery system in Windows 10. The Store app, known as "Windows Store" since Windows 8, is now called the Microsoft Store. The renamed app will allow users to buy hardware and other products that are currently available from the online Microsoft Store. The company is going to sell products like their very own Surface devices, or even third-party devices and hardware via the app. The rebranded store in Windows 10 could indicate the desire of the company to sell TV content, and movies purchased from the Store available across different devices and the web.

Microsoft has also updated the Store app with its very own Fluent Design language. As you may already know, the previous update brought Fluent Design to the product listings. Now, yet another effect, 'Connected Animations', is now applied to the same area of the app. The following video demonstrates it in action:

At the moment of this writing, Fluent Design effects are mostly available to Windows Insiders in the Fast ring.