By default, the Windows operating system adds special metadata to all files you download from the Internet to an NTFS drive, which it considers as attachments. Later, when you try to open or execute the downloaded file, Windows 10 prevents you from opening it directly and shows you a security warning that the file originated from somewhere else and can be insecure. Let's change this behavior to get rid of this warning.


The metadata which is added to the downloaded file is called "zone information". It is an invisible file stored as an alternate data stream in the same downloaded file to indicate that the file came from a network. Every time File Explorer opens the file, it reads the attached zone info and checks if it came from "outside". In that case, Windows Smart screen warning appears:

If you disabled Smart Screen, another warning message can appear with this text: 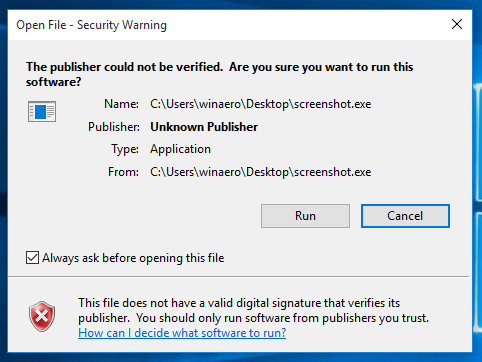 If you want to completely prevent Windows from adding the zone information in the file's alternate data stream so you don't even need to unblock such files, follow these steps:

If your Windows 10 edition comes without the Group Policy app, you can apply a simple Registry tweak instead:

Thereafter, any files downloaded using browsers (or download managers) which respect this setting will no longer add this to executable files so you don't even need to unblock such files.

There is an alternative way to prevent Windows 10 from blocking certain file types after you download them from the Internet. It involves modifying the file extensions which Windows considers as potentially harmful attachments. Read the following article: How to disable the “Publisher couldn’t be verified” message in Windows 10.

That's it. If you have a tip, question or want to leave feedback, feel free to write it in the comments.