Starting with Windows 10 Fall Creators Update, the operating system is able to automatically reopen apps which were running before shutdown or restart. This behavior is totally unexpected for most Windows users who upgraded to the recent release of the OS. Here is what you can do to change the situation and stop Windows 10 from restoring previously open apps after a reboot.


If you are following Windows 10 development and articles on this blog, you might be familiar with all the changes done to Windows 10. One of them was the ability to re-launch the apps after installing updates, i.e. after restarting once updates were installed. When one of our readers, Kenzo‏, asked me about apps auto restarting in Fall Creators Update, I suggested him to change the appropriate option. See this article "How To Auto Sign In After Restarting Windows 10". However, this didn't help.

Update: If you are running Windows 10 build 17040 and above, you CAN use the option Use my sign in info to automatically finish setting up my device after an update or restart under Privacy in Settings to disable apps auto restarting. 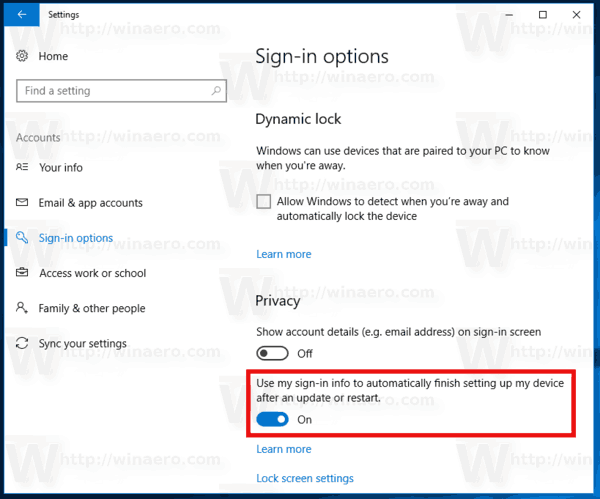 Based on your feedback, the feature to restore applications that have registered for application restart after you reboot or shutdown (through power options available on the Start Menu and various other locations) has been set to only occur for users that have enabled “Use my sign-in info to automatically finish setting my device after an update or restart” in the Privacy section under Sign-in Options Settings.

As I have figured out lately, the option in the Settings app is half baked. While it prevents a number of apps from automatically starting after a reboot, it affects Store apps mostly!

Folks on Neowin have found the answer. They discovered the official Microsoft solution for the situation. It is as follows.

To disable apps auto reopening in Windows 10, do the following.

The commands above will now restart or turn off Windows 10 in a special way, so it won't be able to reopen previously running apps.

You can create the appropriate shortcuts to save your time. Refer to the following article:

If you want, you can add a Shut Down context menu to the Desktop.

Here is how it can be done:

There is an alternative solution. It is simple but annoying. Before you power off or restart Windows 10, close all the running apps. Look at your notification area (system tray) and close any apps which run in the background which you don't want automatically restored.

This way, you will have no apps which Windows 10 would restart.

Regardless of the method you use, I suggest you to disable two options mentioned in the articles

From what I read on Neowin and Reddit, I see many people are frustrated by this change. Actually, it's not clear why we need this feature if we already have the Startup folder.

What about you? Do you find this change useful or not? Share your opinion in the comments.