If you use the Nightly builds of Mozilla Firefox or read Winaero regularly, you might be knowing that Mozilla has introduced add-on signature verification in Firefox Nightly v40. Firefox 40 will reach the stable channel very soon, so you might be interested in disabling this add-ons signing requirement.

Mozilla began requiring all extensions to be signed in order for them to be installable in stable and beta versions of Firefox. Signing will be mandatory for all extensions, regardless of where they are hosted. Extensions which developers submit for hosting on Mozilla's add-on repository will get signed after a review process. Extensions which have already been reviewed and are available in Mozilla's Add-ons repository at this moment will be signed automatically.

As I mentioned above, you will not be able to omit the digital signature requirement in the stable and beta version of the Firefox browser. This will be true for Firefox 41 when it reaches the stable release channel.

Once Firefox 40 is released to the stable channel, the digital signature requirement for add-ons will be enabled, but the user will be able to disable it using the about:config flag:

Once it is set to false, you will be able to install unsigned add-ons in the browser. 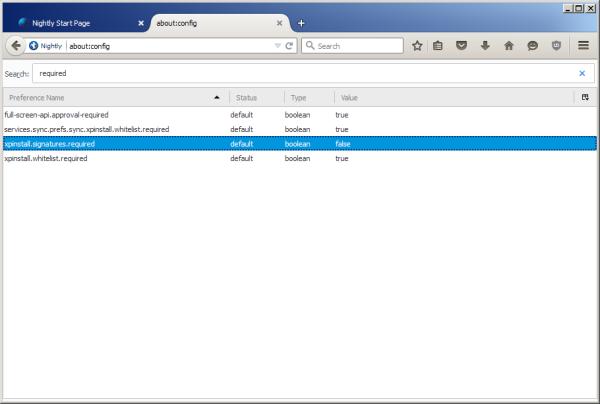 Once Firefox 41 is released to the stable channel, the flag mentioned above will stop working. After that, the only version where digital signature requirement for add-ons will not be enforced will be the Nightly version.

Users who are not happy with the changes that are happening with Firefox might want to pick some other browser for daily use. Personally, I am looking forward to the Vivaldy browser's final release. Probably, I will switch to Vivaldi once it reaches the release stage. The kind of changes that Mozilla is making are simply not acceptable to me. What about you? Are you happy with Firefox these days?