An interesting discovery today was made by Reddit user enginerix. Clippy, the Office Assistant that everyone loves to hate is now included in Cortana as an Easter egg. 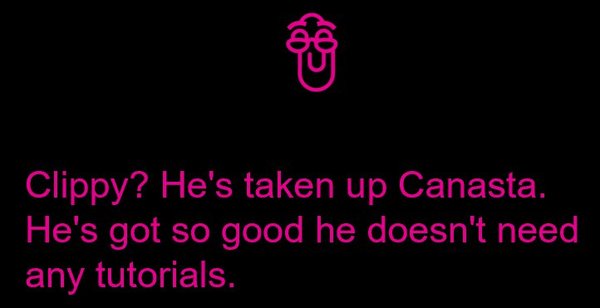 To access the Easter egg, open Cortana and ask 'Where is Clippy? Cortana's circle will change to a new animated version of Clippy. Cortana will provide a randomly generated response about how Clippy is now enjoying his retirement. Here are some of the responses.

Clippy? He’s taken up Canasta. He’s got so good he doesn’t need any tutorials.

Clippy’s enjoying his sunset years out of the media glare.

Clippy was Microsoft's attempt to make the help system for Microsoft Office more user-friendly by including an animated character that responded to various actions. It was included in Microsoft Office for Windows starting with Office 97 up to Office 2003. Microsoft got negative feedback about it from many users because it wasn't of much use and ended up annoying the frustrated user who was really looking for useful answers. The animations were a distraction for some users while working in their favorite Office applications - Word, Excel, PowerPoint because of the frequency of the Office Assistant's appearances. Besides Clippy, there were also several other animated characters included in the suite, all based on Microsoft Agent technology. Microsoft turned off the feature by default in Office XP and completely removed it in Office 2007 and above.