The Windows 10 Settings UI and the Network flyout is completely different from Windows 7 and Windows 8.1. The options have been moved around and it is not clear how to change the network type - private or public. I would like to share how you can change the network location type in Windows 10.


When you are signing in to your account for the very first time, Windows 10 asks you which kind of network you are connecting to: Home or Public. 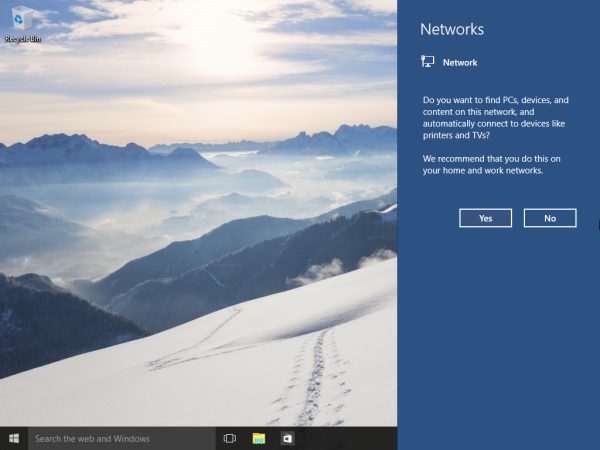 If you pick Yes, the OS will configure it as a private network and turn on network discovery. For a Public network, discovery and access will be limited. If you need to access your computer from a remote PC or browse the PCs and devices on your local network, you need to set it to Home (Private).

If you decide later to change the access type of the network you are connected to, you might even not find which settings to change!

There are two ways to change the network type in Windows 10.

Method one. Change network access type via the Settings app

That's it. This is pretty easy, isn't it? This is all you need to know in the Settings app to change the network location type.

You can change the network profile in Windows 10 using a Registry tweak. After you follow the steps described below, you can easily switch your network location type from Public to Private and vice versa.

After the reboot, open the Network and Sharing Center and check out the state of your network. It should reflect the changes you made. For example, I set my Network to Private using the following values:

That's it. Feel free to post your thoughts, questions and suggestions in the comments.