Mozilla Firefox is one of the well-known web browsers. During its long life from 2004, it got extremely popular due to add-on support but lost the race to Google once they released the Chrome browser. Lately, Firefox has been doing some changes which are not being well-received by users. One latest discovery shows that Firefox causes an abnormally high amount of disk operations which on SSDs can wear them out or reduce their lifespan.


By default, Firefox's profile is located on the same drive where Windows is installed. If you are using an SSD drive, then the profile is stored on it as well in your %appdata%\Firefox folder.

In a recent research from Sergey Bobik of servethehome.com, it was observed that Firefox is, for some reason, writing a huge amount of data in a relatively short period of time to the disk drive. In the case of the author, the freeware version of SSDLife notified him that as much as 12 GB was written to the SSD in one day. Once he spotted this, he started tracking processes using SysInternals Process Explorer. Without browsing heavy websites or watching video streams, Firefox managed to write at least 10 GB of data per day to the drive. 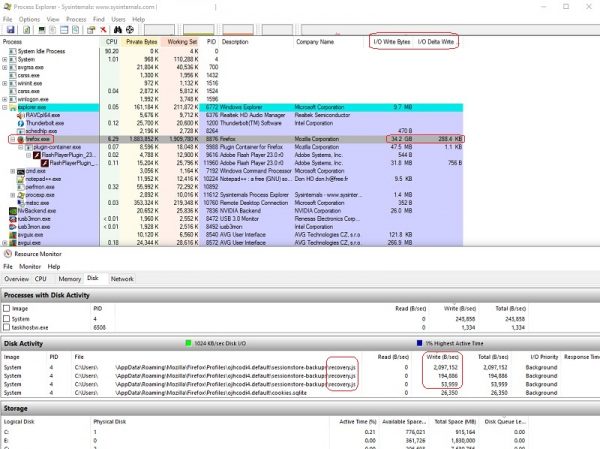 After a long investigation, the author found out that the cause of the issue is the session auto saving feature of Firefox. It is enabled by default and saves the current browsing session's state every 15 seconds. After increasing the timeout, the issue was fixed.

To reduce the frequency with which Firefox writes data to the drive, this is what the author did and what you can do too.

According to the author, if you have a lower capacity consumer level SSD in any of your machines, your drive can be rated for about 20 GB of writes per day and Firefox alone might be using more than half of that. This is especially true for users who usually have several browser windows open with a huge number of tabs.

Changing the mentioned parameter in about:config can help you to lengthen your SSD's life. This tweak can be useful for hard disk drive users too because it reduces the disk load.

It is worth mentioning that SSD technology has greatly improved in recent years and is still rapidly evolving. With MLC and TLC NAND flash memory, 3D NAND and now 3D XPoint memory, modern SSD drives have a very long long span and can withstand several terabytes of data written per day. They can survive for years under heavy load so frequent writes should not be a problem at all. In any case, I recommend to adjust the parameter to some value higher than 15 seconds.

22 thoughts on “Caution: Firefox can wear out your SSD drive”