A as you may already know, starting with Fall Creators Update, Windows 10 comes with a new "My People" feature. It adds a special People bar to the taskbar, where you can pin up to 3 contacts. If you are not happy with this limitation, here is how to bypass it.

"My People" is a special toolbar for the taskbar which shows icons of pinned contacts. Tip: See How to Pin Contacts to the taskbar in Windows 10. It  gives you quick access to messaging options via Email and Skype and aggregate information from Skype, Email, People and other apps which have collaboration tasks.

It provides a number of useful quick actions. For example, you can quickly create an email message by clicking the icon. Or, if you drag and drop a file on the pinned contact icon, it will be possible to share it quickly.

If you are are not happy with the 3-contact limit, you might be interested in increasing the amount of contacts you can pin to the taskbar.

Starting with Windows 10 Build 17063, it is possible to change how many contacts you see pinned to the taskbar.

To pin more than 3 contacts to the taskbar in Windows 10, do the following.

Alternatively, you can apply a Registry tweak. Folks on Windows Central have discovered a Registry tweak which allows changing the contact amount to what you want. This tweak works for Windows 10 versions released prior to Windows 10 build 17063.

Here is how it can be done. 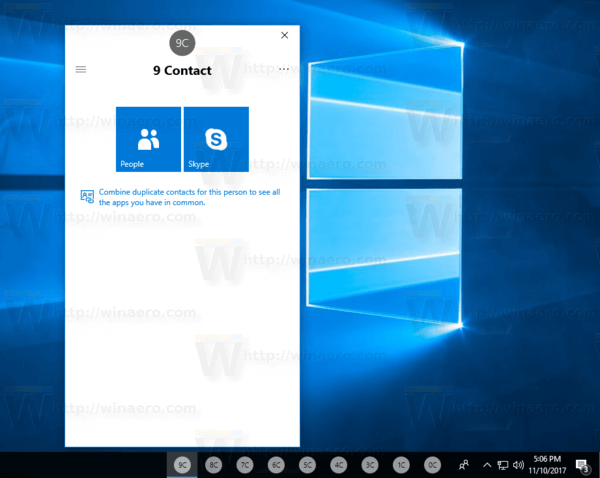 You are done! This will increase the contact limit up to 10 items. Here are 10 contacts I have created. 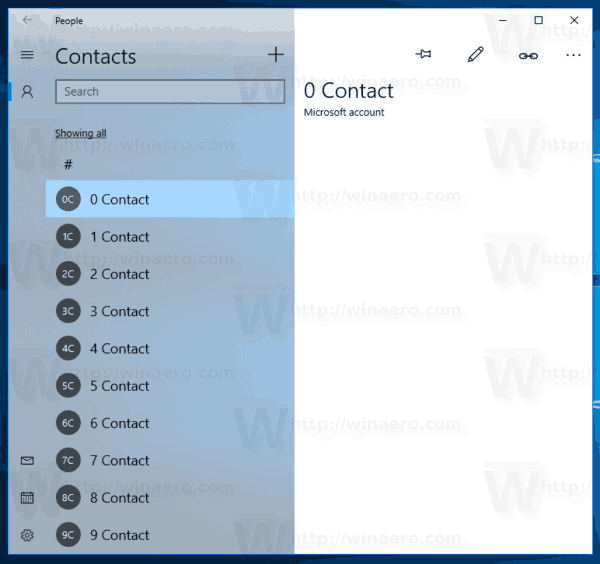 Now, let's pin them to the taskbar. The result will be as follows:

The actual number of contacts you can pin to the taskbar depends on your screen size, its display resolution and DPI. For example, you could have 10 contacts pinned with a Full-HD display, and 5 with 1366x768. These numbers are not accurate, so you need to figure out yourself what the maximum value is in your case.

According to Windows Central, Microsoft imposed the original limit of three people because most screens aren't big enough to accommodate more, and pinning more than three can make the user's taskbar feel cluttered.

To save your time, you can use Winaero Tweaker to unblock the ability to pin more than 3 contacts to the taskbar. You can do it with one click use the option under Desktop & Taskbar\Pin More Contacts to Taskbar. 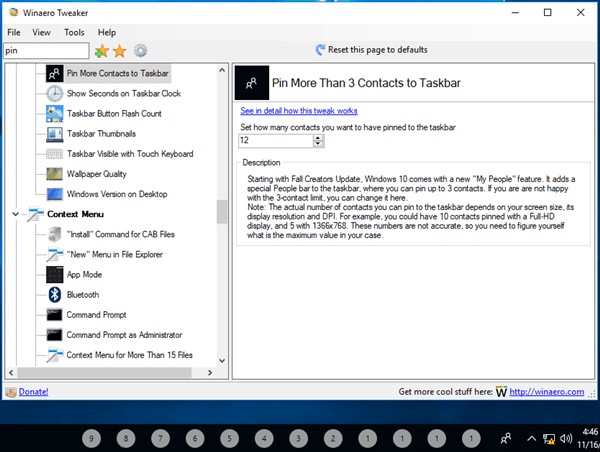 Also, I've prepared ready-to-use Registry files which you can download from here:

Tip: If you find no use for the My People feature, you can remove its icon from the taskbar.