Microsoft has revealed a useful new feature coming to OneDrive which will allow quickly restoring corrupted files. It will add an extra layer of protection for files and folders maintained on OneDrive. If the files in your OneDrive account get compromised by malware, or if you accidentally delete some files, the feature can be used to restore the files. If there is file corruption in your account in the event of a datacenter crash or server file system issue, then also this feature would be useful.

This information came from a presentation by Stephen L Rose, a Senior Product Manager for OneDrive For Business. The presentation was demonstrated at the SharePoint Saturday Event in San Diego on January 13, 2018. The feature will reportedly start rolling out to select users of OneDrive for Business this month. Public availability should happen in 90 days.

This feature is essentially the cloud equivalent of the Windows Recycle Bin. File Restore displays a timeline for your files which can be used to rollback changes: 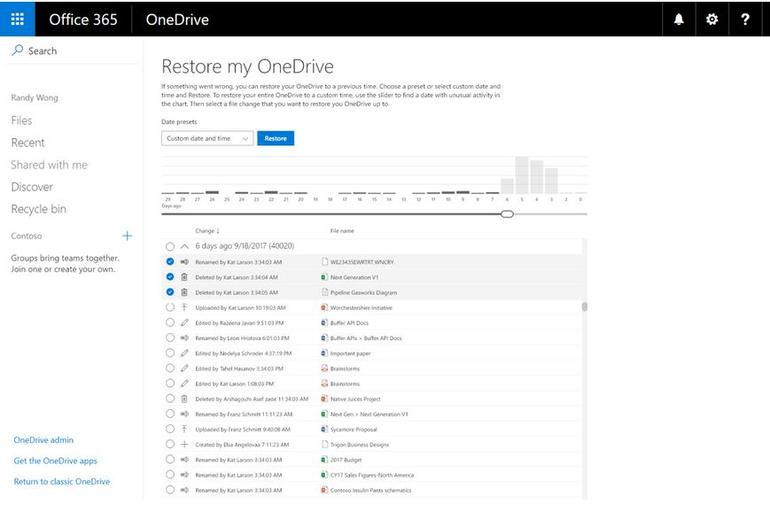 Microsoft calls the File Restore feature as being created to "enable self-service recovery from disastrous events such as mass deletes, corruption, and other data loss scenarios," at Ignite last Fall.

The feature originally was supposed to roll out starting in December 2017. It is meant to help customers who may inadvertently delete OneDrive files, or who have their files corrupted or have their files infected with malware. Files Restore will let users restore their OneDrive for Business to a previous time within the last 30 days.

If too many OneDrive files get corrupted or infected, users will have the option of restoring their entire OneDrive for Business account to a previous time.

It is not clear if File Restore will be available for regular OneDrive users or not, but it is a good change to the service from any point of view. Along with OneDrive's History feature, it increases storage safety of your data.