AliExpress is one of the most popular online markets with more than 100 million items available for purchase. With the rise in its popularity, the company behind it, Alibaba Group, had created an official app for Android and iOS long ago. The main purpose of the app was to keep customers updated about new deals, send order status updates and offer mobile-exclusive price cuts. There wasn't an official app for AliExpress for Windows until now but yesterday, the first version of a Universal Windows Platform app was released for Windows 10. But there's a catch. 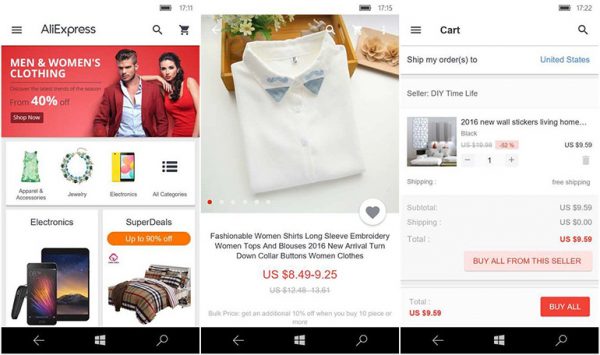 Despite being a Universal app, the newly released app is just a mobile version of their website wrapped into the appx package. There's are no Windows-specific features in it, nor a UI with native controls so there's no difference between this app and the AliExpress site opened in Microsoft Edge.

The app is available on both Windows 10 mobile and PC, but the experience on the latter is not what you really want from a standalone app. You'd still be more satisfied using the website itself when you are at your PC.

Anyway, if for some reason you prefer to have a dedicated app for AliExpress, rather than bookmark it in the browser and pin its tab, feel free to try it out by downloading it from the Windows Store.