Another interesting change was seen in the leaked screenshots of Windows 10 Creators Update: a new user interface for the built-in antivirus and protection software, Windows Defender. Let's see how it looks.

During the October 2016 Microsoft Event, enthusiasts spotted a completely different UI of Windows Defender's management interface compared to the one that ships in current Windows 10 versions.

Here is a screenshot which shows the new user interface: 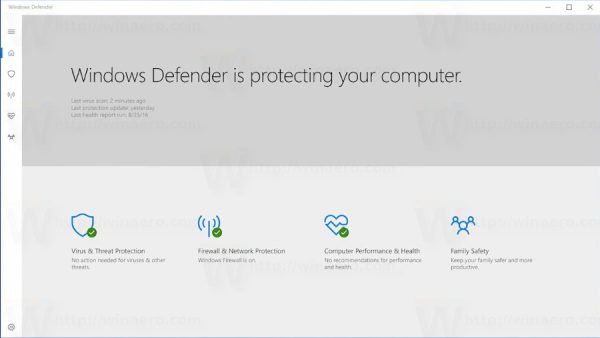 Now it looks like a Universal Windows app and has links to different Windows security tools like firewall, network protection, computer performance and family safety.
It is possible that this user interface replaces the classic Security and Maintenance Control Panel (which was formerly called Action Center in Windows 7/Windows 8.1 and Security Center in Windows XP).

The currently released builds which represent the Creators Update branch, such as Windows 10 build 14955, still come with the old style Defender UI.

If Microsoft adds such a user interface, it will be useful for touch screen device users. It looks like the Universal apps that Windows 10 comes with.

What do you think about this new look of Windows Defender? Do you welcome this change? Tell us in the comments.