Blue Screen of Death is an infamous error screen that appears when a system encounters an unsolvable error. When Windows crashes, it generates a memory dump for further analysis and troubleshooting, then restarts automatically (you can change that.)

In 2012, with the introduction of Windows 8, Microsoft replaced the cryptic and hard-to-understand BSOD screen from Windows 7 with a more user-friendly one that contains a clearer explanation (still useless for many users) of what has just happened to your computer. If you prefer a more nerdy approach, you can change the BSOD screen to show details instead of the sad smiley in Windows 10.

The Black Screen of Death

In 2016, Microsoft revealed Green Screen of Death - a unique version of BSOD with a green background that shows up only on preview builds of Windows. Five years later, Microsoft changes the BSOD screen yet again. This time, it is Black Screen of Death. It appears that the only change in the BSOD UI is the background color. A sad face, a QR-code, and a brief explanation with an error code remain the same. 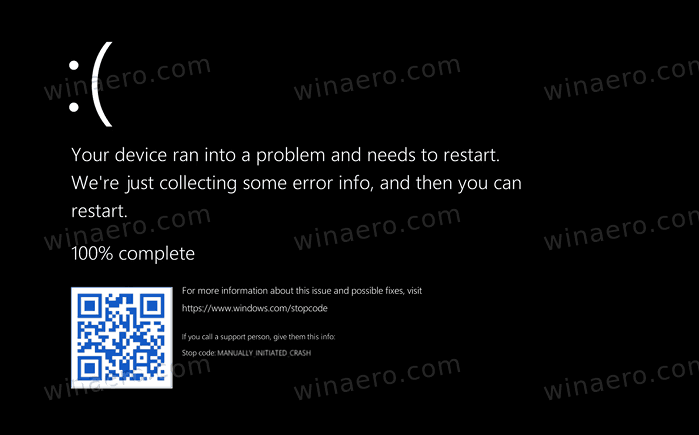 Microsoft does not comment on why it decided to change the iconic screen. One may argue that the black background now matches black loading and shutdown screens in Windows 11. Others theorize that the black fill will be less shocking than the current blue when the system encounters a critical error, ahem, out of the blue.

It is also worth mentioning that the first preview build of Windows 11 still shows Green Screen of Death. You can manually initiate BSOD in Windows 11 to behold the glorious sad face. The Verge reports that Microsoft will enable the new Black Screen of Death in future builds of Windows 11. Perhaps, the company will also provide more information about such a monumental change.