Previously, we wrote that Windows 10 Anniversary Update, codenamed Redstone 1, would become version 1607 and was expected in July 2016. This information is now confirmed.

According to WinBeta, Microsoft has started polishing the Anniversary Update. For internal builds, the software giant is using "Version 1607" as the official reference. The Anniversary Update will arrive 1 year after the original release of Windows 10.

Windows 10 Anniversary Update (Redstone 1) is now feature-complete. This means no new features will be added to the operating system. Developers are currently focused on bug fixes and improving the stability of Windows 10. If some changes do come with the official release, they should be very minor changes. Any major changes will be included into the next major update to Windows 10, currently known as Redstone 2, which is expected to be released in the first quarter of 2017.

Incidentally, Microsoft also announced that from now on, every year, they will be delivering two major updates to Windows at intervals of 6 months, instead of the earlier planned three updates. 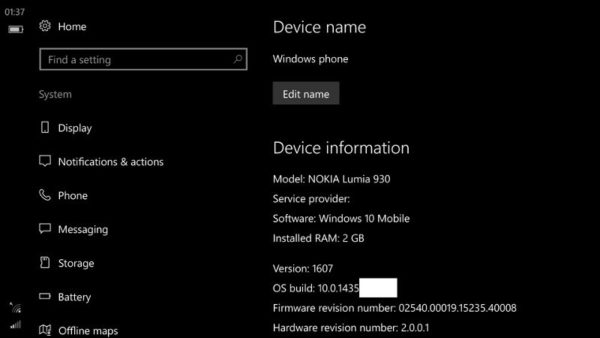 WinBeta mentioned that the latest internal builds of Windows 10 include more improvements to the Settings app. These changes might make it into the final release of the Anniversary Update in July 2016 (source: WinBeta).