As you may already know, Windows 10 Creators Update is expected to be released next month, in April 2017. Recently, Microsoft has released a number of cumulative updates for the current stable version of the OS. After installing these updates, you will see a teaser in Settings which invites you to try out the next generation of Windows 10 before its official release. 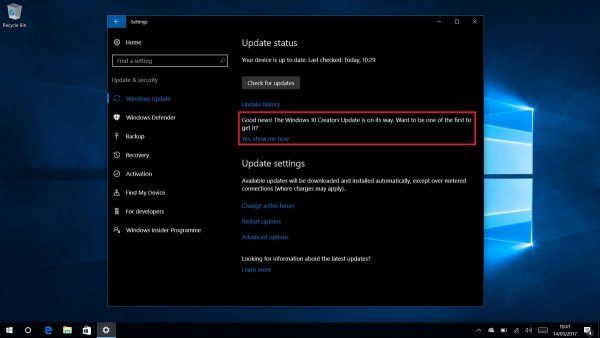 After installing the update, open the Settings app at Update & recovery - Windows Update. There, the following message will be displayed:

Good news! The Windows 10 Creators Update is on its way. Want to be one of the first to get it?

If you click the link Yes, show me how, then the following web page will be opened: Windows 10 Creators Update is coming soon

You will be prompted to join the Windows Insider program.

Thank you for your interest in being one of the first to experience the Windows 10 Creators Update! We're finalizing the update and will be ready to share it with you soon. When the update is ready for your device, you'll receive a notification asking you to review your privacy settings before downloading the update.

Once you agree to join the quick redistribution channel, you will get Windows 10 Creators Update faster than other users running the production branch of the OS.

Windows 10 Creators Update is expected to carry lots of new features. We have been covering this update in detail after the Anniversary Update shipped. The RTM build of Creators Update will be decided very soon. Image credits: Zac Bowden.