Windows 10 Anniversary Update, the next major update to Windows 10 will bring a notable number of changes to the operating system. These includes a Card UI in Action Center and Cortana to show snippets of info, Edge with add-on support, improved customization options for the Action Center, more added Settings and a new Start menu. These are just some of the changes Microsoft is working on. A new interesting change was spotted for the upcoming release of Windows 10. Microsoft is working to create a new Advanced Options page for app add-ons and downloadable content for apps. 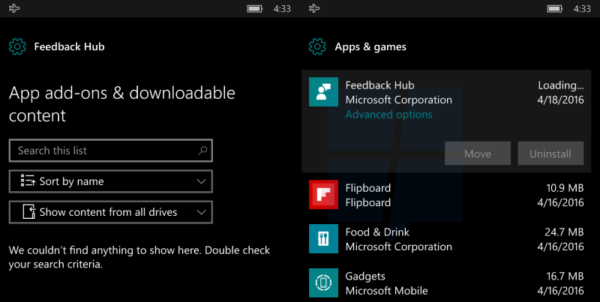 One of the internal builds of Windows 10 already has this feature implemented. MSDN documentation has a reference for this new feature:

It is not clear what these add-ons will exactly do, but it seems fairly obviously that it will allow developers to provide some extra features or premium content for apps (which could be downloaded) via Windows Store. So essentially it's like in-app purchases on mobile platforms like iOS and Android, or Downloadable Content (DLC) packs from game developers.

Currently, the feature has made its appearance only on mobile builds of Windows 10, but it can become available in Desktop versions of Windows 10 as well (via MSpoweruser).

Do you welcome this feature? Do you think this model is a viable for you vs paying all of the price upfront for the paid or free app that you use?