I just released a new version of Winaero Tweaker with a focus on advanced appearance in Windows 8, Windows 8.1 and Windows 10. In version 0.3.1, I finally implemented the long awaited advanced appearance settings/window metrics, which allow you to change fonts and appearance of windows and Desktop elements in Windows 8 and above. I added a bunch of new features to the app. Let's see what.

The following changes are included in Winaero Tweaker 0.3.1:

The Colored title bars feature now comes with auto colorization enabled by default.
This means when you click the Apparance - Colored Title Bars -> Enable Colored Title Bars, the title bar color of windows in Windows 10 will be calculated automatically based on your current wallpaper. 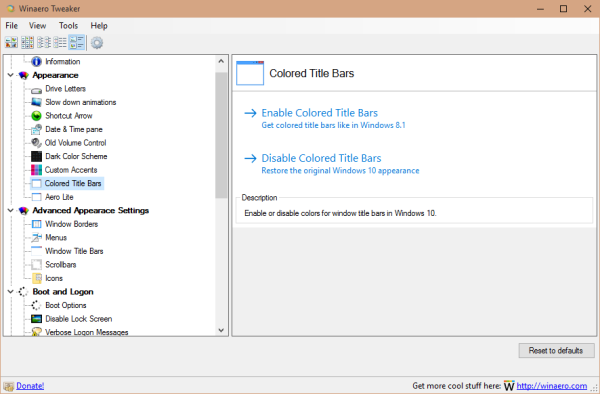 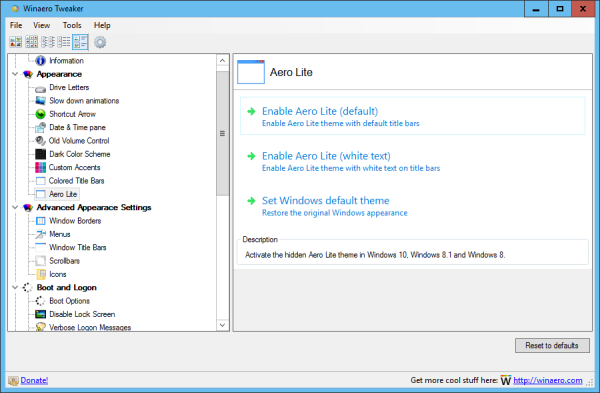 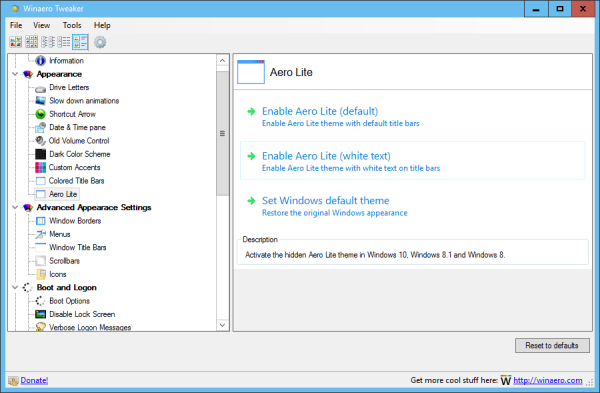 Added Advanced appearance->Menus. Here, you can change the height and font of menus in Windows 7, Windows 8/8.1 and Windows 10. Changes will be applied instantly. No reboot is required. The following screenshot demonstrates this feature in action: 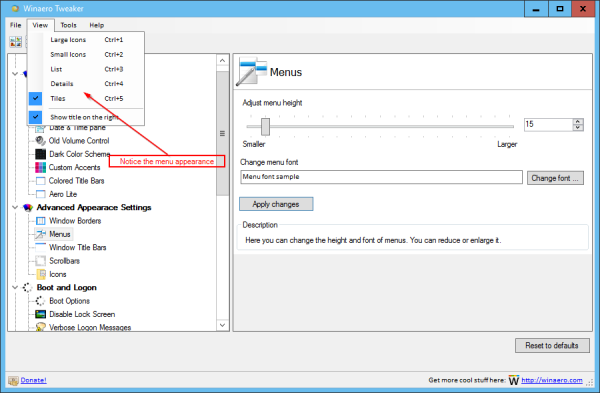 Added Advanced appearance->Title bars. Here, you can adjust the height and font of titlebars and window buttons in Windows 7, Windows 8/8.1 and Windows 10. Changes will be applied instantly. No reboot is required. This was the most requested feature by users. For example, here is how window title bars look in Windows 10 by default: 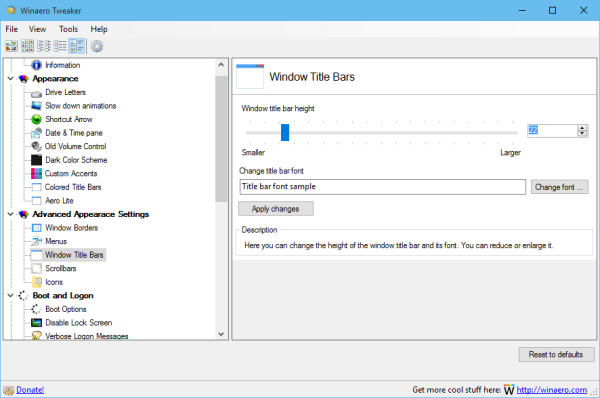 You can reduce or enlarge it as follows: 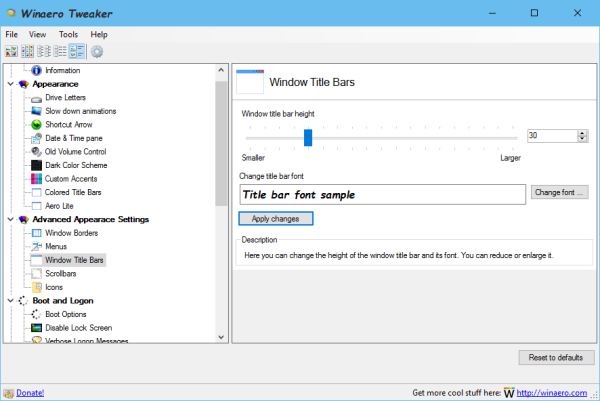 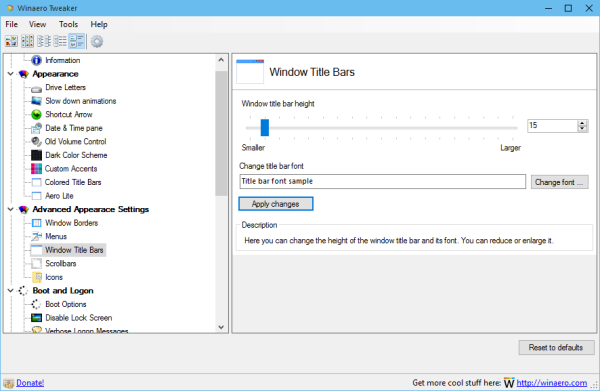 Added Advanced appearance->Scrollbars. Here, you can adjust the width of scrollbars and change the size of scrollbar buttons in Windows 7, Windows 8/8.1 and Windows 10. Changes will be applied instantly. No reboot is required.
Default scrollbars: 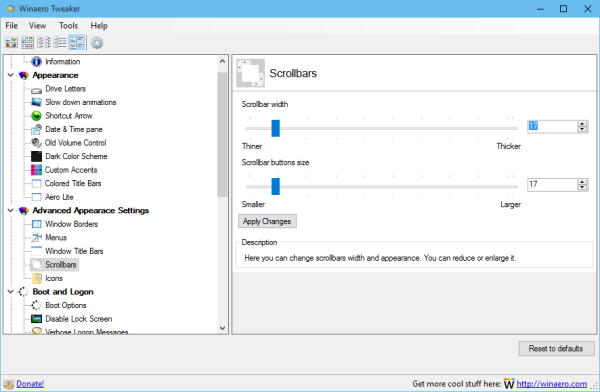 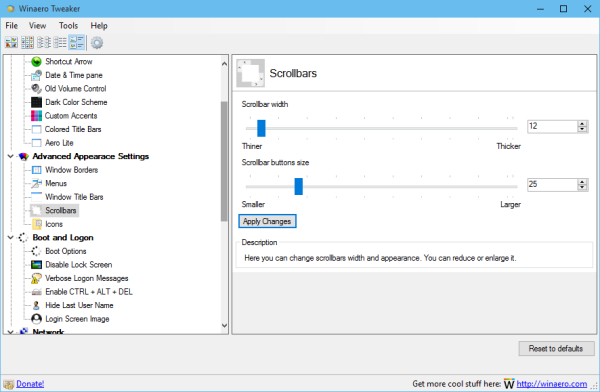 Added Advanced appearance->Icons. Here, you can customize the font and appearance of Desktop and Explorer icons. The font you choose will be applied to icons instantly without any additional actions from the user.

Tip: Adjusting vertical and horizontal spacing settings require signing out and logging in back to your user account, but you can avoid it. Just untick "View->Align icons to grid" in the Desktop context menu and then tick it back. You can adjust the icon spacing on the Desktop in Windows 7, Windows 8/8.1 and Windows 10.

The Window Borders feature is available now in Windows 10. It can be used to tweak borders in Aero Lite and in third party themes (but not in the default Windows 10 theme which still has no borders!) 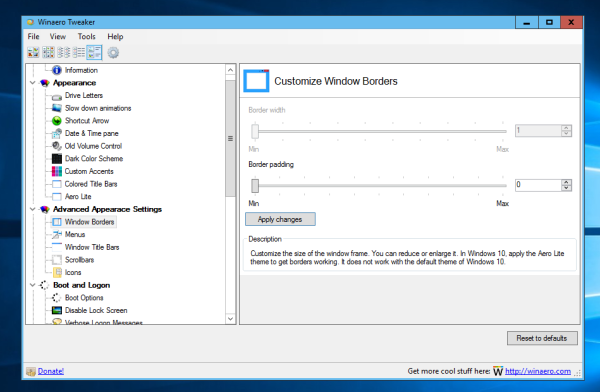 A bug was fixed in Appearance -> Custom accents. The "reset defaults" button was not working. This is fixed.

Various improvements to the code.

26 thoughts on “Winaero Tweaker 0.3.1 is out, features lots of useful tweaks”