In Windows 10, the command prompt was significantly updated. It has a LOT of new features which make it really useful. Starting with Windows 10 build 18272, Microsoft added the ability to zoom the console window using Ctrl + Mouse Wheel. This works in the good old command processor, cmd.exe, WSL, and PowerShell. 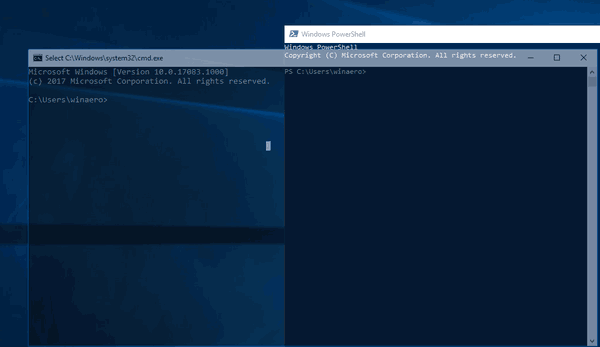 The Command Prompt is a built-in tool of the Windows operating system available since its first versions. It allows the user to use classic DOS commands (but not all of them in modern Windows versions) as well as Win32 console commands and apps. It is a mature, powerful and extremely useful tool for advanced Windows users. While Microsoft is emphasizing PowerShell in recent builds of Windows 10, the good old cmd.exe app is still widely used in the OS.

With recent updates, the Command Prompt has received a bunch of improvements. For example, you can use an extended set of hotkeys such as:

You can change the transparency level of any console window with the Ctrl + Shift + mouse wheel sequence, and apply a custom color scheme.

After upgrading to Win10 Insider build 18272 or later, open any Console window (E.g. launch `Cmd`, `PowerShell`, `WSL`, etc.) and then hit and hold CTRL while scrolling your mouse wheel / trackpad.

In addition, the Command Prompt now follows you system and app theme. When you are using the dark theme, its scroll bar turns dark.