Since the launch of Windows 10 Anniversary Update with support for extensions in Microsoft Edge, there hasn't been many of them released in the Windows Store. One of the reasons for that is that Microsoft isn't allowing individual developers to publish them, only partnering with the ones they find interesting. From the start, there were already two ad blocking extensions — AdBlock and AdBlock Plus, and now there's finally a third option available: uBlock Origin has made its way to the Windows Store. 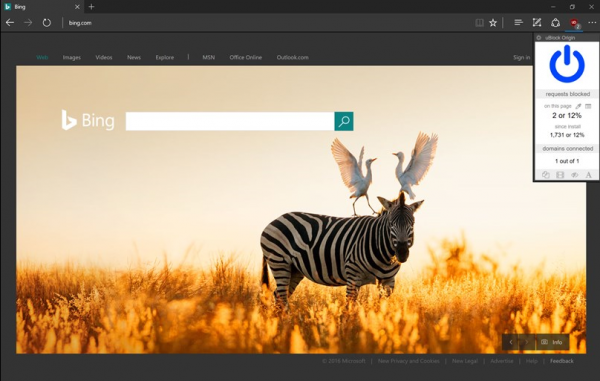 uBlock Origin is one of the most popular alternatives to the above-mentioned extensions and it's offering pretty much the same functionality but in a more lightweight package which is critical for browser performance. Memory consumption of uBlock Origin is significantly lower than AdBlock Plus. Right now the released version for Edge should be considered a preview and may contain some bugs and issues as expected. Developers want to hear the feedback at the extension's GitHub repository.

In all other aspects, uBlock Origin for Edge isn't different from its versions for other browsers. So if you want to take an early look at it and aren't scared of hitting some rough edges, you can head to its Store page and download it from there.

6 thoughts on “uBlock Origin is now available for Microsoft Edge”