Windows 8, as everyone knows by now, comes with brand new user interface called "Modern UI". It features the Start screen, the Charms and the new PC Settings app which is designed for devices with touchscreens. In Windows 8.1 Update 1, Microsoft has improved some aspects of the Modern UI, made it more customizable and tweakable. However, some useful and interesting parameters are not accessible with the default set of options. My little freeware application, ModernUI Tuner, will allow you to control some mighty useful parameters. Let's take a closer look at the app. 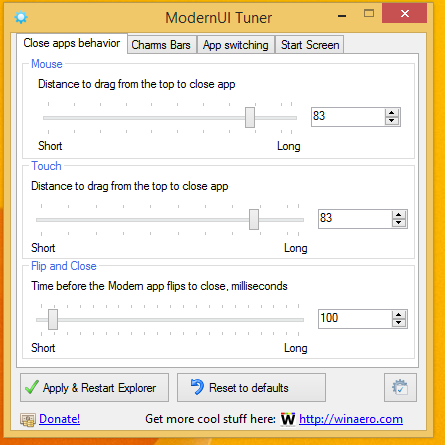 The main window of the ModernUI Tuner app features a tabbed user interface, where settings are grouped logically. It has four tabs, which are as follows:

This tab contains three options to control how fast you close Metro apps with the mouse or by touch. You can also tweak the flip to close feature which makes it easy to fully terminate Modern apps with the mouse.
The track bar for Distance to drag from the top to close app defines how long you need to drag a Modern app's thumbnail from the top edge to the bottom edge of the screen. Move the slider towards the left so you will have to drag Metro apps less towards the bottom edge of the screen. They will be immediately just by dragging a shorter distance.

The slider for Distance to drag from the top to close app in the Touch section allows you to tweak the same behavior as the option mentioned above, but it only affects touch gestures. Set it to a desired value to avoid dragging the running app all the way down to close it.

The last option in here, Time before the Modern app flips to close, allows you to speed up the flip to close feature. By default, in Windows 8.1, when you drag the Modern app's thumbnail to the bottom edge, you have to wait a few seconds before the app's thumbnail flips over and the app closes itself completely. If you will set the above slider to the left, the app will be closed immediately!

All these options are really time savers. 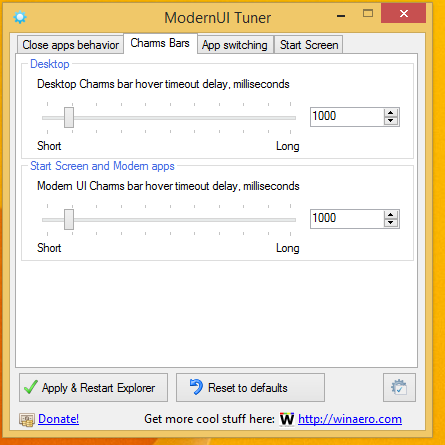 There are two sliders on this tab. They control the delay before the Charms appear on the screen when you hover over to the top right or bottom right corner. The values can be adjusted separately for Modern apps and the Desktop.
The first option, Desktop Charms bar hover timeout delay, tweaks the timings of the Charms in Desktop mode, while the second slider changes the hover timeout for Charms to appear inside Modern apps. This also is very useful.

You might want to set a higher value than the default to prevent the Charms from popping up too often when you move your mouse pointer to the right edge of the screen. 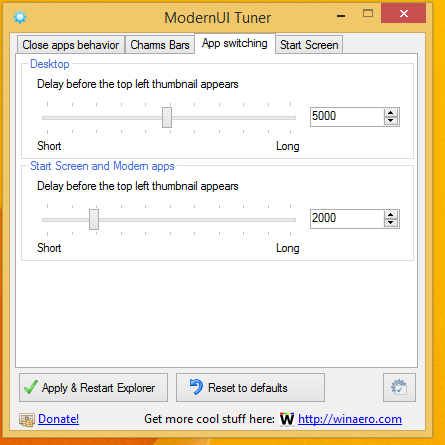 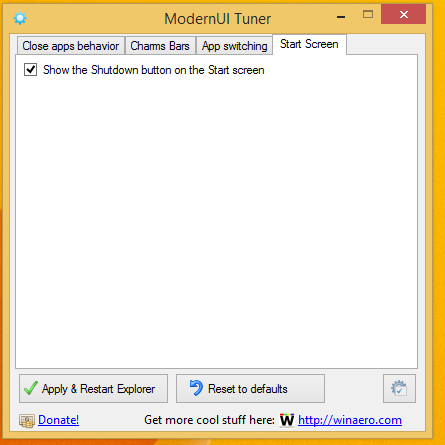 The last tab includes a setting to enable or disable the power button on the Start screen. Some additional tweaks could have been included there but Microsoft removed some interesting tweaks such as the setting to tweak the parallax effect of the background image. If more tweaks become available for the Start screen in Windows 8.1/Windows 9, I will add them to this tab.

That's it. ModernUI Tuner is a free, portable application. It works on Windows 8.1 Update 1 x86 and x64.

You might be interested in reading about tweaks that ModernUI Tuner does in the Registry. See the following articles for details: