Microsoft has released their brand new Windows 10 for public testing. The Technical Preview build comes with a set of experimental options for the command prompt (cmd.exe) and other console-based tools such as PowerShell which can improve their usability. Here are the notable improvements.

In Windows 10, the Properties window of the command prompt and PowerShell features a new "Experimental" tab with several exciting options. All the new options for experimental features that apply to console windows are on this tab. 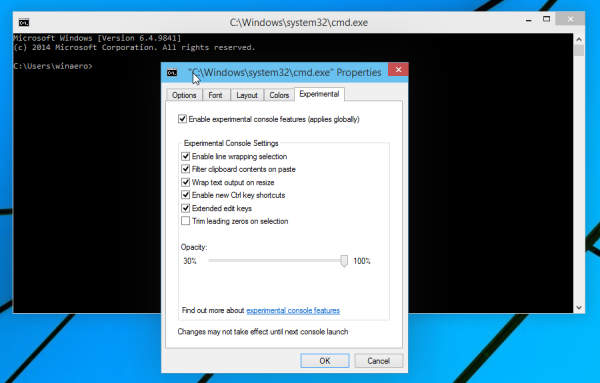 In previous versions of the Command Prompt, selecting text for copying it required you to use a square selection box in the cmd.exe window and then hitting the Enter key. After you copied the text, you needed to correct the line wrapping with Notepad or a similar text editor.
In Windows 10, you are able to select the text just like you select text in a regular text editor like Notepad or Microsoft Word. No more funky tricks with selection are involved, all annoying DOS-specific formatting will be removed on copy and paste.

This will enable default text editing shortcuts for the command prompt window. The list of hotkeys is as follows:

Extended Edit Keys were supported by the Command Prompt as far back as Windows 2000. There was a GUI Resource Kit tool, CustCon.exe which was a console key customizer but now Microsoft is making this feature public and mainstream. We are looking forward to hear from Microsoft for more details about this feature.

This feature could also be tweaked on older releases of Windows using the console key customizer tool. It is useful for people who deal with digits and data in the console. When selecting a number with leading zeros by the double click, the selection box will begin only after any existing insignificant zeros. For example, 00100 becomes just 100.

This feature will allow you to set the transparency of the command prompt window from 30% to 100% (opaque). It affects all opened command prompt windows. For me it doesn't look particularly useful as it turns the whole window transparent including the window frame. This decreases the readability and does not improve the user experience in any way. It would have been better if Microsoft added transparency with glass/blur for the background only, that would have been really fancy.

That's it. Now you know about all the experimental command prompt features in Windows 10.